The Priest and Satan's Deal 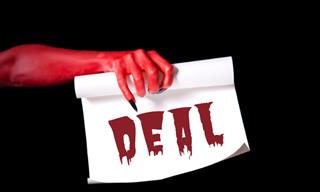 A priest was approached one night by Satan himself. "Do not be frightened," said Satan. "I have an offer to make. I will make you tremendously powerful, famous and rich in return for just one small favour: half of your ability to hear." The priest was stunned. "Let me think about it for a few days." The next morning, the priest requested to meet the bishop. "Your Excellency, I need your advice for a temptation I have been given!" He told over his strange encounter. The bishop was shocked. "A deal with Satan?! Do not do it, it will destroy your soul!" But he could see the priest was not convinced. So the bishop arranged a meeting with the archbishop. "Your Excellency, this priest has an urgent matter he needs advice about!" He told over the story. The archbishop bowed his head in silent prayer, and after a few moments responded. "Firstly, your hearing is a gift from God. It would be forbidden to sacrifice any part of it. Secondly, a deal with Satan?!? Never do it!" But the priest wasn't convinced. He was imagining all the wealth, fame and power he'd receive. So the archbishop requested an audience with the Pope. The three of them came into the Papal office in great awe. They sat, and the archbishop spoke. "Your Holiness, this priest has a terrible temptation and needs advice!" "Sorry," said the Pope, "could you speak a little louder?"
religion joke priest pope bishop Devil deal rich Satan famous offer archbishop powerful power fame wealth
Rate: Dislike Like
Monster Puns
Vampires make awful businessmen. They just can't deal with the stakeholders.
Funny Marriage Quotes
"A good marriage is where each partner secretly suspects they got the better deal." - Anonymous
“Marriage is really tough because you have to deal with feelings … and lawyers.”—Richard Pryor
Friendship Quotes
"If you can survive 11 days in cramped quarters with a friend and come out laughing, your friendship is the real deal."
— Oprah Winfrey
Camel Puns
I just got back from Dubai where I was offered 40 camels for my wife.
I usually smoke Marlboro but hey... a deal's a deal.
Shakespeare Insults
A weasel hath not such a deal of spleen as you are toss’d with.

The Genie and the Three Wishes 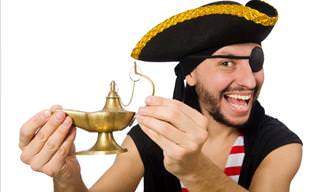 A man finds a magic lamp. Of course, as the deal goes, he rubs the lamp and out pops a genie that thunders he has 3 wishes to make.. "For my first wish, I want to be some kind of royalty." the man says. The Genie nods. "Yes, yes. That can easily be arranged." "For my second wish, I want to live in luxury, the most beautiful castle." "It will be done", the Genie agrees. "And I want to be married to a beautiful princess." "I understand", says the Genie, "However, your wishes require a lot of work. But it should be done tomorrow." So the man goes to sleep and when he wakes up, he is laying in a beautiful bed. He looks around and everything is just as he wished. He is a noble, living inside a beautiful castle and next to him a beautiful princess smiles at him. "Oh, you're finally awake, Franz-Ferdinand. We should get up, today we're traveling to Sarajevo."
sleep genie joke wishes bed deal lamp castle tomorrow royalty princess noble franz-ferdinand sarajevo awake
Rate: Dislike Like
Fairy Puns
My pen ran out of ink and an ink fairy in the shape of a squid appeared. He said if I let him eat my dinner of shrimp he'd help me out by giving me some ink. The deal smelled kind of fishy, but I needed to finish my homework.
So we did it squid pro quo.
Yard Puns
My wife got mad at me for playing catch with my son in the backyard
... I didn’t see the big deal until I dropped him.
Orange Puns
What did the oranges do after concluding the meeting?
They peeled the deal.
My friend was bragging that his new 3D printer can print a gun.
Big deal. I have had a Canon printer for years.
Saxophone Puns
Hear about the saxophone player who switched from a tenor to a soprano saxophone in the middle of the concert?
The press made quite a big deal out of his sax change.
Dirty Chocolate Pick Up Lines
Were I to impregnate you, in several years the child will purchase you flowers and chocolates. Deal?
Kitchen Puns
I have a phobia of using the wrong amounts of ingredients when I’m cooking
So I’ve been taking measures to deal with it.
Funny Parenting Quotes
“Sending your kids to summer camp teaches them important life lessons... like, ‘You can deal with your problems by sending them to summer camp.’” 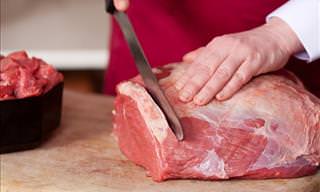 On a warm summer night, a young lady entered the butcher shop with startling news for the butcher: The baby in her arms was his. Nonplussed, the butcher didn't know what to do, and eventually offered the only thing he thought he could - he offered to provide her with free meat until the boy was 16. She agreed. He had been counting the years off on his calendar, and one day the teenager, who had been collecting the meat each week, came into the shop and said, "I'll be 16 tomorrow." "I know," said the butcher with a smile, "I've been counting too, tell your mother, when you take this parcel of meat home, that it is the last free meat she'll get, and watch the expression on her face." When the boy arrived home he told his mother what the butcher said. The woman nodded and said, "Son, go back to the butcher and tell him I have also had free bread, free milk, and free groceries for the last 16 years and watch the expression on his face!"
boy mother butcher deal woman
Rate: Dislike Like
Want to start your day laughing? Register to our Daily Joke! Want to start your day laughing? Register to our Daily Joke!
Did you mean:
Continue With: Facebook Google
By continuing, you agree to our T&C and Privacy Policy
Contact us | Help | About us | Terms | Privacy policy | Categories | Archive | Collections
Login
Already registered?
Enter your email address and get full access.
Did you mean:
Not a member? Click Here
Personal Details