Tiger Puns
Tigers are bad at basketball because they have only four feet.
Meat Puns
Sheep have a clever way of keeping all their four feet warm in the winter; they wear muttons.
Food Quotes
"When the waitress asked if I wanted my pizza cut into four or eight slices, I said, 'Four. I don't think I can eat eight."
— Yogi Berra
"Strength is the capacity to break a chocolate bar into four pieces with your bare hands - and then eat just one of the pieces."
— Judith Viorst
"My doctor told me to stop having intimate dinners for four. Unless there are three other people."
— Orson Welles
Parrot Puns
What has four legs, four eyes, and a net? Four pirates looking for a lost parrot!
Crocodile Puns
Did you know alligators can grow up to 18 feet?
But most of them only have four!
Family Puns
Struggle with your Children's Math homework?
Apparently it's quite common in five out of every four homes.
Funny Animal Poems That Rhyme
Some folks call me a sausage dog
I think they couldn’t be meaner
It’s not my fault I’m long and short
And look like a misshapen wiener

I’ve got four stumpy little legs
So my tummy is near to the ground
My owner’s take me for a drag not a walk
Guess that's why they named me Cigarette!

(Rob Carmack)
Funny Groucho Marx Quotes
"I've got the brain of a four year old. I'll bet he was glad to be rid of it."
Funny Marriage Quotes
“The most important four words for a successful marriage: ‘I’ll do the dishes.’”—Anonymous 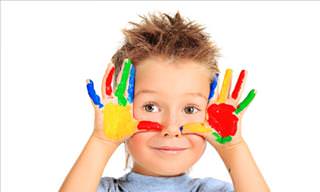 The teacher asks little Johnny if he knows his numbers. "Yes," he says. "My daddy taught me." "Can you tell me what comes after three?" "Four," answers little Johnny. "What comes after six?" "Seven," answers little Johnny. "Very good," says the teacher. "Your father did a very fine job. What comes after ten?" "A jack," answers little Johnny.
children teacher boy father little johnny joke six answer jack ten counting three four seven numbers
Rate: Dislike Like
Ancient Greek Monster Puns
"If you want to pass this point alive, you must answer my riddle: What goes on four legs in the morning, two legs at noon and on three legs in the evening?" the Sphinx asked.
Oedipus pondered for a moment, "Probably one of those new Pokemones," he finally replied. "There is like 600 of them.
"Fair enough man," spoke the Sphinx. "I can't reasonably expect you to remember all their names. You may pass."
Utensils Puns
What do you call a knife that cuts 4 loaves of Irish bread at once?
A four loaf cleaver!
Funny Animal Quotes
“Our perfect companions never have fewer than four feet.”