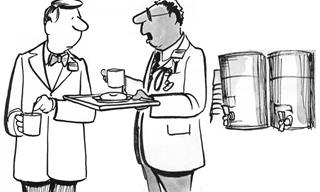 Two doctors, Dean and Gable, are treating a man with lung disease. They’re explaining how his smoking weed has led to his condition worsening. “But it’s just herbal!” the patient protested. “How can it be bad?” Dr. Jenkins sighed. “Nature isn't all innocent. Apricot stones contain lethal amounts of cyanide. There is a certain plant in my back garden - if you sit under it for just 5 minutes, you will die. Just because it’s natural doesn’t mean it’s safe for you!” The man seemed to accept that, and promised to stop his smoking. After he left, the doctors went to lunch. As they were sitting down to eat, Dr. Smith asked, “Oh by the way, what IS that plant that kills you if you sit under it?” “A water lily."
doctor joke safe doctor nature cyanide man weed disease condition plant die smoking innocent lung
Rate: Dislike Like
Don't Mess with Mother Nature... 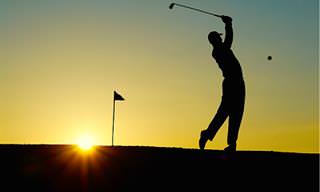 On the 16th hole of the golf course, Fred had hit his ball into the woods. Harry, his partner had laughed and poked fun, but then somehow managed to hit his ball into the woods, just a few yards beyond. Fred looked for a long time, getting angrier every minute. Finally, in a patch of pretty yellow buttercups, he found his ball. Instead of just continuing the game, he took his club and thrashed every single buttercup in that patch. Suddenly, in a flash and puff of smoke, a little old woman appeared. She said, "I'm Mother Nature! Do you know how long it took me to make those buttercups? Just for that, you won't have any butter for your popcorn the rest of your life.....better still; you won't have any butter for your toast for the rest of your life.....as a matter of fact, you won't have any butter for anything the rest of your life!" Then POOF! She was gone. After Fred got a hold of himself, he hollered for his friend, "Harry!... Harry!... where are you?" Harry yells, "I'm over here, in the pussy willows." Fred screams back: "DON'T SWING!!! FOR GOD'S SAKE!!! DON'T SWING!!!"
rude joke golf nature
Rate: Dislike Like
Anti Jokes
Due to the expansive nature of the universe, many items both natural and manufactured could be described in this manner. Move over, anti-jokes. If you laugh at these dark jokes, you might just be a genius!
Funny Limericks
Is it me or the nature of money,
That's odd and particularly funny.
But when I have dough,
It goes quickly, you know,
And seeps out of my pockets like honey.
Head Puns
Saw my dad outside with a tv antenna on his head
When I asked him why, he said he was trying to get more in tune with nature.
Funny Haiku
I met a man, Stan.
His nature is Afghani.
Yes! Afghanistan.
Contact us | Help | About us | Terms | Privacy policy | Categories | Collections