The Real Laws of the Universe 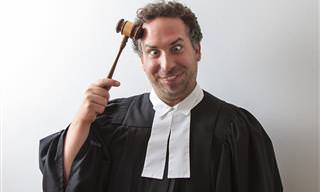 LORENZ'S LAW OF MECHANICAL REPAIR Once your hands become coated with grease or paint, your nose will begin to itch. ANTHONY'S LAW OF THE WORKSHOP Any tool, when dropped, will roll to the least accessible corner. KOVAC'S CONUNDRUM When you dial a wrong number, you NEVER get an engaged tone. CANNON'S KARMIC LAW If you tell your boss you were late for work because you had a flat tire, the next morning you will have a flat tyre. O'BRIEN'S VARIATION LAW If you change queues, the one you have left will start to move faster than the one you are in now. Same goes for car lanes. BELL'S THEOREM The moment your body is immersed in water, the phone rings. RUBY'S PRINCIPLE OF CLOSE ENCOUNTERS The probability of meeting someone you know increases when you are with someone you don't want to be seen with. WILLOUGHBY'S LAW When you try to prove to someone that a machine won't work, it will. ZADRA'S LAW OF BIOMECHANICS The severity of the itch is inversely proportional to the reach. BREDA'S RULE At any event, the people whose seats are farthest from the aisle arrive last. OWEN'S LAW As soon as you sit down for a hot cup of coffee, someone will want to talk to you until the precise moment your coffee is cold...
machine coffee aisle seat nose probability ruby owen funny rules funny laws breda zadra itch
Rate: Dislike Like
Head Puns
My head hurt and I had a really runny nose during math class
I think i had a sin(x) infection.
Nose Puns
What do you call a person with a peg nose acting suspicious?
Suspeg.
A quadriplegic man became famous playing beautiful piano classics with only his nose, ears, chin, and forehead.
Before going on stage to perform, his tour manager would say, "Alright John. It's time to face the music."
What do you do if your nose goes on strike?
Picket.
“My Dog has no nose. How does he smell?”
"Awful.”
What comes out of your nose at 200 mph?
Lambogreeny.
A nose visited its home town.
It was overcome with nostril-gia.
my nose starts bleeding at eleven every night
but I’ve seen stranger things.
When you’re smooching with your honey, and your nose is kinda runny, you may think it’s kinda funny, but it snot.
What did Dr. Frankenstein say when Pinocchio’s nose grew?
"IT’S A LIEEEEE!!"
My head hurt and I had a really runny nose during math class
I think i had a sin(x) infection.
You know, people say they pick their nose,
but I feel like I just was born with mine.
A person with a very blocked nose walks into a doctors office.
The doctor says: "So, you're having mucus problems?"