Avocado Puns
What does a duck that’s made of avocado say?
Guac.
Spice Puns
One day, tamarind, curry and ice were crossing the road. All of a sudden they heard a gunshot. Then, tamabrind ball, curry duck and ice-cream!
Cosmetics Puns
What did the duck say when she purchased new lipstick?
"Put it on my bill."
Shower Puns
What do you call a duck that steals soap from the bathtub?
A robber ducky.
Food Poems
Thanksgiving Dinner's sad and thankless
Christmas Dinner's dark and blue
When you stop and try to see it
From the turkey's point of view.

Sunday Dinner isn't sunny
Easter Feasts are just bad luck
When you see it from the viewpoint
Of a chicken or a duck.

Oh how I once loved tuna salad
Pork and Lobsters-- lamb chops too
Till I stopped and looked at dinner
From the dinner's point of view.

(Shel Silverstein)
Funny Tall People Insults & Comebacks
While visiting an airport, my friend asked me to duck when a plane went above our heads.
Monster Puns
What do you call a duck with fangs?
Quackula.
Farmer vs. Lawyer

A big city lawyer went duck hunting in rural North Alberta. He shot and dropped a bird, but it fell into a farmer's field on the other side of a fence. As the lawyer climbed over the fence, an elderly farmer drove up on his tractor and asked him what he was doing. The litigator responded, "I shot a duck and it fell in this field, and now I'm going to retrieve it." The old farmer Peter replied, "This is my property, and you are not coming over here." The indignant lawyer said, "I am one of the best trial lawyers in Canada and, if you don't let me get that duck, I'll sue you and take everything you own." The old farmer smiled and said, "Apparently, you don't know how we settle disputes in Alberta. We settle small disagreements like this with the 'Three Kick Rule.' The lawyer asked, "What is the 'Three Kick Rule'?" The Farmer replied, "Well, because the dispute occurs on my land, I get to go first. I kick you three times and then you kick me three times and so on back and forth until someone gives up." The lawyer thought about the proposed contest and decided that he could easily take the old codger. He agreed to abide by the local custom. The old farmer slowly climbed down from the tractor and walked up to the attorney. His first kick planted the toe of his heavy steel-toed work boot into the lawyer's groin and dropped him to his knees! His second kick to the midriff sent the lawyer's last meal gushing from his mouth. The lawyer was on all fours when the farmer's third kick to his rear end, sent him face-first into a fresh cow pie. Summoning every bit of his will and remaining strength the lawyer very slowly managed to get to his feet. Wiping his face with the arm of his jacket, he said, "Okay, you old fart. Now it's my turn." The old farmer smiled and said, "You can have the duck."
farmer joke lawyer joke duck groin kick canada knees litigator disagreement trespassing dispute
Rate: Dislike Like
Movie Pick Up Lines
"Darling, you're on fire. Like doughnut grease."
- Duck Dynasty
Elf Puns
Why did the elf use a duck to wake him on Christmas morning?
So he could be up at the quack of dawn!
Funny Animal Poems That Rhyme
First you got an alligator.

Next came a giraffe.

bears hide in your bath.

run amok through all your rooms!

Soon, if you don't set them free - there will be no room for me!

(Lycia Harding)
Toaster Puns
How do you turn a duck into a soul singer?
Stick him in an oven until his Bill Withers
The Bartender and the Duck 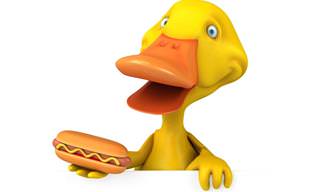 A duck walks into a pub and orders a beer and a ham sandwich. The barman looks at him and says, "But you're a duck". "I see your eyes are working", replies the duck. "And you talk!" exclaims the barman. "I see your ears are working", says the duck, "now can I have my beer and my sandwich please?" "Certainly", says the barman, "sorry about that, it's just we don't get many ducks in this pub. What are you doing round this way?". "I'm working on the building site across the road.” explains the duck. Then the duck drinks his beer, eats his sandwich and leaves. This continues for 2 weeks. Then one day the circus comes to town. The Ringleader of the circus comes into the pub and the barman says to him, "You're with the circus aren't you?, I know this duck that would be just brilliant in your circus, he talks, drinks beer and everything!". "Sounds marvelous", says the ringleader, "get him to give me a call!". So the next day when the duck comes into the pub the barman says, "Hey Mr. Duck, I reckon I can line you up with a top job, paying really good money!" "Yeah?", says the duck, "Sounds great, where is it?" "At the circus", says the barman. "The circus?" the duck enquires. "That's right.", replies the barman. "The circus?" the duck asks again. "Yes." says the barman "That place with the big tent?" the duck enquires. "Yeah." the barman replies. "With all the animals?" the duck questioned. "Of course." the barman replies. "With the big canvas roof with the hole in the middle?" asks the duck "That's right!" says the barman The duck looks confused. "What the heck would they want with a plasterer?"
bar animal joke bartender bar joke duck drink construction pub circus
Rate: Dislike Like
Funny Animal Quotes
“My friend was attacked by a duck. I yelled “duck!” to warn him, but it just made it worse.” 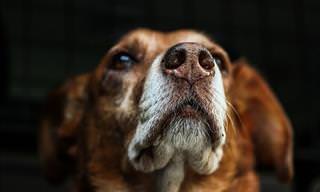 A woman brought a very limp duck to a veterinary surgeon. As she laid her pet on the table, the vet pulled out his stethoscope and listened to the bird's chest. After a moment or two, the vet shook his head sadly and said, "I'm sorry, your duck, Cuddles, has passed away." The distressed woman wailed, "Are you sure?" "Yes, I am sure. Your duck is dead," replied the vet. "How can you be so sure?" she protested. "I mean you haven't done any testing on him or anything. He might just be in a coma or something." The vet sighed, turned around and left the room. He returned a few minutes later with an old dog. As the duck's owner looked on in amazement, the dog stood on his hind legs, put his front paws on the examination table and sniffed the duck from top to bottom. He then looked up at the vet with sad eyes and shook his head. The vet patted the dog on the head and took it out of the room. A few minutes later he returned with a cat. The cat jumped on the table and also delicately sniffed the bird from head to foot. The cat sat back on its haunches, shook its head, meowed softly and strolled out of the room. The vet looked at the woman and said, "I'm sorry, but as I said, this is most definitely, 100% certifiably, a dead duck." He turned to his computer terminal, hit a few keys and produced a bill, which he handed to the woman. The duck's owner, still in shock, took the bill. "$150!" she cried, "$150 just to tell me my duck is dead?!?" The vet shrugged. "I'm sorry. If you had just taken my word for it, the bill would have been $20, but with the Lab Report and the Cat Scan, it's now $150."
animal joke cat veterinarian duck labrador animal
Rate: Dislike Like
TV Puns
My favorite crime TV show has a duck as the main character.
He always quacks the case.
Anti Jokes
A duck walks into a bar. Animal control is promptly called and the duck is released in a nearby park.
Easter Puns
Why did the Easter bunny fire the duck?
He kept quacking all the eggs.
The Stuck Duck 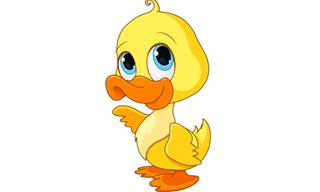 A duck goes into a store and waddles up to the manager. He asks him if he sells duck food. The shopkeeper tells him no. The duck then leaves. The next day the duck returns and asks the same question again. The shopkeeper tells him, testily, that the store still doesn’t sell duck food. The duck leaves. The following day the duck returns again and asks the same question. The shopkeeper is getting pissed off, so says no and warns the duck if he asks one more time, he will staple the duck’s feet to the floor. The next day the duck goes back into the store. He waddles up to the (now red faced) shopkeeper and asks ‘Do you sell staples?’ 'No'. The puzzled shopkeeper says. 'Great.' Says the duck. 'Do you sell duck food?’
food business joke duck manager store question floor staples pissed off
Rate: Dislike Like
Want to start your day laughing? Register to our Daily Joke! Want to start your day laughing? Register to our Daily Joke!
Continue With: Facebook Google Use Email
By continuing, you agree to our T&C and Privacy Policy
Contact us | Help | About us | Terms | Privacy policy | Categories | Collections