The Hidden Strength of the Wrestler 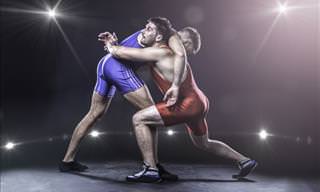 The wrestling match was about to begin and the Contender's coach was once again lecturing the Contender. "If I've told you once, I've told you a thousand times-don't let the Champion get you in The Pretzel! No one has ever been able to get out of The Pretzel!" The Contender nodded his head, getting ready for the match. "I know, Coach, if you've told me once...I won't let him get me in The Pretzel!" "Good! Just don't let him get you in The Pretzel!" "Coach!" The crowd in the arena was roaring. The two wrestlers moved to ring, a well lit white square in the center of the seats. The Contender was called and the crowd cheered, then the Champion was called and the crowd roared. Coach called to the Contender "Don't let him get you in The Pretzel!", and the Contender nodded and moved into the center. After a few moments, the match began. Coach watched as the wrestlers twisted together, all power and speed. The crowd surged. The bodies on the mat became a twisted wreck. "The Pretzel..." the Coach whispered, reaching to throw the towel into the ring, knowing there was no way the Contender could win. Before he could, though, there was a horrible, wrenching scream of agony from the ring. The wrestlers parted, fought, and before anyone could react, the Contender had the Championed pinned. The count went down. There was a new Champion. Coach's jaw was on the ground, the towel still in his hand. He was amazed, shocked. The new Champion was hustled into the locker room, and Coach followed. "How did you do that? No one has ever got out of The Pretzel! Never!" "Well, Coach, if you've told me once, you've told me a thousand times...but he is really good. I thought I had everything under control, but he was so fast, before I knew it, he had me in The Pretzel and I heard the count going down. I couldn't move." "I looked up and there was a groin hanging right in front of my face, and I figured I had nothing to lose so I chomped on it as hard as I could." "You can't believe the strength you get from biting your own testicles."
gross joke joke about men sports joke wrestling groin
Rate: Dislike Like
Farmer vs. Lawyer

A big city lawyer went duck hunting in rural North Alberta. He shot and dropped a bird, but it fell into a farmer's field on the other side of a fence. As the lawyer climbed over the fence, an elderly farmer drove up on his tractor and asked him what he was doing. The litigator responded, "I shot a duck and it fell in this field, and now I'm going to retrieve it." The old farmer Peter replied, "This is my property, and you are not coming over here." The indignant lawyer said, "I am one of the best trial lawyers in Canada and, if you don't let me get that duck, I'll sue you and take everything you own." The old farmer smiled and said, "Apparently, you don't know how we settle disputes in Alberta. We settle small disagreements like this with the 'Three Kick Rule.' The lawyer asked, "What is the 'Three Kick Rule'?" The Farmer replied, "Well, because the dispute occurs on my land, I get to go first. I kick you three times and then you kick me three times and so on back and forth until someone gives up." The lawyer thought about the proposed contest and decided that he could easily take the old codger. He agreed to abide by the local custom. The old farmer slowly climbed down from the tractor and walked up to the attorney. His first kick planted the toe of his heavy steel-toed work boot into the lawyer's groin and dropped him to his knees! His second kick to the midriff sent the lawyer's last meal gushing from his mouth. The lawyer was on all fours when the farmer's third kick to his rear end, sent him face-first into a fresh cow pie. Summoning every bit of his will and remaining strength the lawyer very slowly managed to get to his feet. Wiping his face with the arm of his jacket, he said, "Okay, you old fart. Now it's my turn." The old farmer smiled and said, "You can have the duck."
farmer joke lawyer joke duck groin kick canada knees litigator disagreement trespassing dispute
Rate: Dislike Like
Contact us | Help | About us | Terms | Privacy policy | Categories | Collections