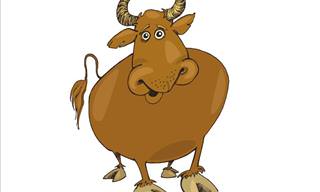 Three bulls heard the rancher was bringing another bull onto the ranch. First Bull: "I've been here five years. I'm not giving this new bull any of my 100 cows." Second Bull: "I've been here three years and have earned my right to 50 cows. I'm keeping all my cows." Third Bull: "I've only been here a year, and so far, you guys have only let me have 10 cows. I may not be as big as you fellows, but I'm keeping all 10 of my cows." Just then an 18-wheeler pulls up in the pasture carrying the biggest bull they've ever seen. At 4,700 pounds, each step he takes strains the steel ramp. First Bull: "Ahhhh... actually I think I can spare a few cows for our new friend." Second Bull: "I.. I have too many cows to take care of. I can spare a few." They look over at the third bull and find him pawing the dirt, shaking his horns and snorting. First Bull: "Son, don't be foolish - let him have some of your cows and live to tell about it." Third Bull: "Hell, he can have all my cows. I'm just making sure he knows I'm a BULL."
animal joke hell bull bulls farm joke ranch animal cows big dirt keep live helping horns snorting fellows
Rate: Dislike Like
Chicken Puns
What do you call a chicken that crosses the road, rolls in the dirt, crosses the road again, and then rolls in the dirt again?
A dirty double-crossing chicken.
Wine Puns
Where does wine catch up on all the vineyard dirt?
Through the grapevine.
Birthday Puns
For my birthday, my friends gave me a bunch of dirt and sand.
I appreciated the sediment.
Birthday Jokes
For my birthday, my friends gave me a bunch of dirt and sand.
I appreciated the sediment.
Garden Quotes
“Gardeners know the best dirt.”
— Anonymous
Garden Puns
I'm a gardener and I'm OK
I sleep all night and I plant all day!
I dress in grubby clothing and hang around with slugs.
Oh I'm happy in the garden
With dirt and plants and bugs.
Appliance Puns
If you think that your phone, laptop, microwave and fridge spying on you is bad
Then you should know that your vaccum cleaner has been collecting dirt on you for a while .
Ski Puns
How are snow boards and vacuum cleaners alike?
Both have dirt bags on board.
Dark Short Jokes
What does a doctor use to cover his mistakes?
Dirt.
Insults & Comebacks
If I told you that I have a piece of dirt in my eye, would you move?
Weather Puns
With the nice warm weather last weekend, a neighbor was enthusiastically diggin' in the dirt planting his garden!
He was so excited about it, he wet his plants.
Grass Puns
Having a dirt yard instead of grass is a bold move...
But having a giant rock is boulder.
Dad Jokes
Two drunk guys were about to get into a fight. One draws a line in the dirt and says, "If you cross this line, I'll hit you in the face."
That was the punchline.
Want to start your day laughing? Register to our Daily Joke! Want to start your day laughing? Register to our Daily Joke!
Did you mean:
Continue With: Facebook Google
By continuing, you agree to our T&C and Privacy Policy
Contact us | Help | About us | Terms | Privacy policy | Categories | Archive | Collections
Login
Already registered?
Enter your email address and get full access.
Did you mean:
Not a member? Click Here
Personal Details