Jokes For Women
Wives want to videotape the birth of their child, while husbands want to videotape the conception.
Heart Puns
I had a birth defect where they had to relocate my heart
I guess you could say my heart wasn't in the right place.
Arm Puns
I'm glad I have my 2nd Amendment right to bear arms.
Otherwise, I'd have been amputated at birth.
Sloth Puns
I told my husband that the National Zoo's sloth bear gave birth but ate two of the three babies. He said "now she's guilty of 2 deadly sins: sloth and gluttony."
Insults & Comebacks
Your birth certificate is an apology letter from the condom factory.
Medical Puns
My friend gave birth in the car on the way to the hospital
Her husband named the kid Carson.
Cow Puns
What do you call a cow that just gave birth?
Decalfeinated.
Nurse Puns
As my wife was giving birth, all the doctors and nurses started yelling, “Push! Push!”
I was convinced it was a Pull door.
Wife is about to give birth.
Nurse: "I'm gonna deliver the Baby."
Dad: " Actually, we'd like him to keep his Liver"
Tree Puns
A woman who gave birth in a tree was sent to jail
She was charged with treeson
Yo Mama So Old
Yo mama so old her birth certificate is in Roman numerals.
Yo mama so old her birth certificate says expired on it.
Ice Cream Puns
How does an ice cream cone congratulate you on the anniversary of your birth?
It’s sherbert day!
From Work to Worse 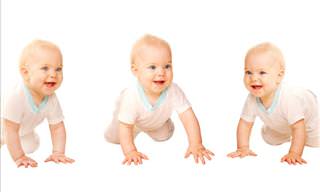 I was sitting in the waiting room of the hospital after my wife had gone into labor. The nurse walked out and said to the man sitting next to me, "Congratulations sir, you’re the new father of twins!" The man replied, "How about that, I work for the Doublemint Chewing Gum Company." The man then followed the woman to his wife’s room. About an hour later, the same nurse entered the waiting room and announced that Mr. Smith’s wife has just had triplets. Mr. Smith stood up and said, "Well, how do ya like that, I work for the 3M Company." The gentleman that was sitting next to me then got up and started to leave. When I asked him why he was leaving, he remarked, "I think I need a breath of fresh air." The man continued, "I work for 7-UP."
husband wife father nurse hospital baby work twins air birth labor triplets 7-up gentleman
Rate: Dislike Like
Coffee Puns
What do you call a cow who’s just given birth?
De-calf-inated!
The Miracle Child 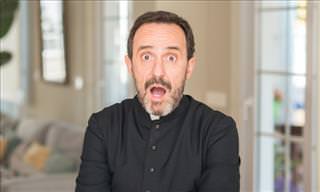 A woman starts dating a doctor. Before too long, she becomes pregnant and they don’t know what to do. Long About nine months later, just about the time she is going to give birth, a priest goes into the hospital for a prostate gland infection. The doctor says to the woman, “I know what we’ll do. After I’ve operated on the priest, I’ll give the baby to him and tell him it was a miracle.” “Do you think it will work?” she asks the doctor. “It’s worth a try.” he says. So the doctor delivers the baby and then operates on the priest. After the operation he goes in to the priest and says, “Father, you’re not going to believe this.” “What?” says the priest. “What happened?” “You gave birth to a child.” “But that’s impossible!” “I just did the operation,” insists the doctor. “It’s a miracle! Here’s your baby.” About fifteen years go by, and the priest realizes that he must tell his son the truth. One day he sits the boy down and says, “Son, I have something to tell you. I’m not your father.” The son says, “What do you mean, you’re not my father?” The priest replies, “I’m your mother. The archbishop is your father.”
religion father son mother religion joke priest baby birth operation archbishop miracle gland prostate
Rate: Dislike Like
Anti Jokes
You know you’re a true 90s kid when you look at your birth certificate and it says that you were born between 1990 and 1999.
Contact us | Help | About us | Terms | Privacy policy | Categories | Collections