Music Pick Up Lines
Babe, your beauty throws me off-beat
Music Puns
What do you call a pianist who throws trash everywhere?
Litterachi.

A Duel For Love 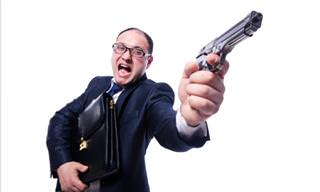 A man gets home early from work and catches his wife in bed with another man... The husband challenges the other man to an old fashioned duel with his hand guns, whoever manages to shoot first and kill the other gets his wife. The other man agrees, so they go into another room so the wife doesn't have to see it. Once in the other room, the husband turns to the other man and says: "Why should either of us have to die? We will both fire a shot into the air and lay on the ground as if we're dead, when she comes in she will see our 'lifeless' bodies and rush to one of us, whoever she chooses can have her." The other man agrees again, so they fire into the air and collapse. The wife throws the door open and peers down at the two men, then backs out of the room and calls out: "Darling, you can come out! They're both dead!"
cheating joke door shot ground duel guns die lifeless bodies throws darling both catches peers old fashion
Rate: Dislike Like
Blonde Jokes
What do you do when a blonde throws a pin at you? Run like hell, she has a grenade in her hand.
Water Puns
What do you call it when a guy throws his laptop into the ocean?
Adele, Rollin’ in the Deep.
Geology Puns
What happens when someone throws a rock at you? Rock bottom hits you.
Blond Jokes
What do you do when a blonde throws a grenade at you?
Pull the pin and throw it back
Baseball Puns
A baseball walks into a bar. The bartender throws him out.
Birthday Jokes
Harry asks his wife Harriet: "What would you like as a present for your birthday?"
Harriet looks at him sarcastically and yells "A divorce!" and then throws her head back and laughs.