A Man Buys a Pig on a Farm 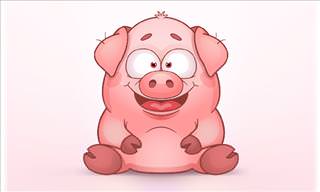 What did the father squirrel tell his son?
Acorny joke.
It may seem a bit corny but we appreciate you working your tail off for us.
Wolf Puns
The poor werewolf was busy chasing his own tail. We were later told that he was trying to make ends meet.
Too Much Alike 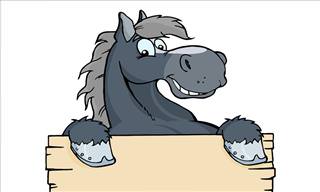 A fellow walks into a bar very down on himself. As he walks up to the bar the bartender asks, "what's the matter?" The fellow replies, "well I've got these two horses (sniff, sniff), and well... I can't tell them apart. I don't know if I'm mixing up riding times or even feeding them the right foods." The bartender, feeling sorry for the guy, tries to think of something he can do. "Why don't you try shaving the tail of one of the horses?" The man stops crying and says, "that sounds like a good idea, I think I'll try it." A few months later he comes back to the bar in worse condition than he was before. "What's the matter now?" the bartender asks. The fellow, in no condition to be in public, answers, "I shaved the tail of one of the horses (sob, sob), but it grew back and I can't tell them apart again!" The bartender, now just wanting him to shut up or leave says, "why don't you try shaving the mane, maybe that will not grow back." The fellow stops crying, has a few drinks, and leaves. A few months later the fellow is back in the bar. The bartender has never seen anybody in this sorry of a state. Without the bartender even asking the fellow breaks into his problems. "I.. I shaved the (sob) mane of one of the (sniff) horses, and... it... it... grew back!" The bartender, now furious at the guy's general stupidity, yells, "for crying out loud, just measure the stupid horses. Perhaps one is slightly taller than the other one!" The fellow cannot believe what the bartender has said and storms out of the bar. The next day the fellow comes running back into the bar as if he had just won the lottery. "It worked, it worked!" he exclaims. "I measured the horses and the black one is two inches taller than the white one!"
bar animal joke farmer joke bartender bar joke stupidity joke horses animal shave furious tail idea taller
Rate: Dislike Like
Whale Puns
What’s the difference between a marine biologist and a dog?
One tags a whale, the other wags a tail.
Penguin Puns
Where does a penguin go when it loses its tail?
A re-tail store.
Football Puns
I feel tail great!
Funny Haiku
The rule for today.
Touch my tail, I shred your hand.
New rule tomorrow.
Monkey Puns
What did the monkey say when he cut off his tail?
It won’t be long now.
Dinosaur Puns
What has a spiked tail, plates on its back, and sixteen wheels? A Stegosaurus on roller skates!
Rabbit Puns
Why did the rabbit like the adventure? It was a “hare-raising tail.”
Mouse Puns
What is small, has a long tail and works with the police?
A gerbil shepherd dog!
Contact us | Help | About us | Terms | Privacy policy | Categories | Collections