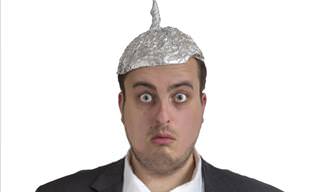 Three men die: A Physicist, a Philosopher and a Local town idiot. They stand before the gates of heaven. Between them and the gates stands St. Peter. St. Peter tells the three men "Sorry boys, but it seems heaven is getting jam-packed. To let you in, you have to beat me intellectually, either through a form of a question or a challenge." The first to come forward is the Physicist, and he tells St. Peter with great confidence "Show me the entire mathematical markup of the Higgs Boson." To which St. Peter merely snaps his finger and produces a dozen large whiteboards and proceeds to write up the whole markup from memory. After careful examination, the Physicist reluctantly agrees that he is correct, and with one snap of the finger, St. Peter sends him to the fiery gates of hell. The next to come forward is the Philosopher. Thinking that the Physicist made a grave mistake of challenging St. Peter with an empirical question, he decides to give a less-than-empirical challenge of his own. He tells St. Peter "Show me all of the works of Socrates." he says with a smirk, knowing Socrates never wrote down his teachings, St. Peter would be hard pressed on producing an answer. But despite this, St. Peter produces a stack of papers, and the Philosopher reads it with great criticism. There are things there he had never even heard of, and questioned the paper's authenticity, to which St. Peter remarked "Me and Socrates have chatted a lot ever since he got here." And with a snap of a finger, the Philosopher was gone. Last to come forward is the Local town idiot. The idiot asks St. Peter, "Could I give you a riddle instead?" and St. Peter replies "Of course! I love riddles!" and the idiot proceeds. "What comes up a hill with six legs and comes down with four, comes back up with two legs and back down with no more?" St. Peter ponders it for a good five minutes and arrives at no answer, and tells the idiot "Well, congratulations, you have left me dumbfounded." and with a snap of a finger, the gates of heaven opens up. The idiot proceeds to enter heaven, but right before he does so, he feels St. Peter tapping on his shoulder, he turns around. "So," St. Peter asks "What's the answer to your riddle?" The Idiot shrugs his shoulders and says "How the heck should I know?"
heaven afterlife socrates stupidity joke heaven and hell joke physicist st. peter idiot philosopher
Rate: Dislike Like
To Be Eight Again 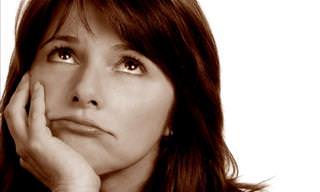 A husband was sitting on the edge of the bed, watching his wife, who was looking at herself in the mirror. Since her birthday was not far off, he asked what she’d like as a gift. “I’d like to be 8 again,” she replied, still looking in the mirror. On the morning of her birthday, he rose early, made her a nice big bowl of Coco Pops, and then took her to Adventure World theme park. What a day! He put her on every ride in the park; the Death Slide, the Wall of Fear, the Screaming Roller Coaster, everything there was. Five hours later they staggered out of the theme park. Her head was reeling and her stomach felt upside down. He then took her to a McDonald’s where he ordered her a Happy Meal with extra fries and a chocolate shake. Then it was off to a movie, with popcorn, a soda pop, and her favorite candy, M&Ms. What a fabulous adventure! Finally she wobbled home with her husband and collapsed into bed, exhausted. He leaned over his wife with a big smile and lovingly asked, "Well dear, what was it like being 8 again?" Her eyes slowly opened and her expression suddenly changed. "I meant my dress size, you idiot!"
joke about men husband wife marriage joke marriage mirror birthday moral dress idiot eight size
Rate: Dislike Like
The Rude Passenger

Years ago, a man needs to take a flight. As he gets to his plane seat, he is surprised to find a parrot strapped into the seat next to him Once in the air, the stewardess comes round and the man asks her for a coffee. The parrot meanwhile squawks: “And get me a bloody whisky, you moron.” The stewardess, somewhat taken aback, remains composed and brings a whisky for the parrot, but forgets the coffee. When the man points this out to her, the parrot immediately drains its glass and yells, “And get me another darn whisky while you’re at it, idiot!” Visibly upset, the shaking stewardess returns shortly with a whisky for the parrot, but still no coffee. Unaccustomed to such slackness, the man loses his temper and decides to try the parrot’s approach: “I’ve asked you twice for a coffee, moron, now go and get it or I’ll give you a slap!” In a couple of seconds, two burly disguised security personnel grab both him and the parrot, take them to the emergency exits and throw them out. As they are falling from the plane, the parrot turns to the man and says: “You know, for someone who can’t fly, you’ve got a big mouth.”
animal joke plane joke parrot whisky stewardess moron coffee idiot flight seat security rude parrot temper
Rate: Dislike Like
The New Confessional 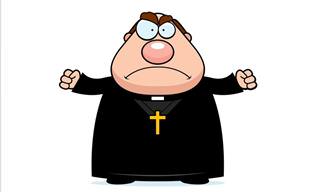 Michael Murphy goes into the confessional box after years of being away from the Church. Sighing, thinking about his many sins, he gets into the church. Spotting there is no line at the confessional, he pulls aside the curtain, enters and sits himself down. Shocked, he realizes here’s a fully equipped bar with crystal glasses, the best vestry wine, Guinness on tap, cigars and liqueur chocolates nearby. On the wall a fine photographic display of various women who appear to have misplaced their garments. He hears a priest come in. “Father, forgive me." Says Murphy. "I think its been a while since I’ve been to confession and to be sure I must say that this place is much better than it used to be!" The priest freezes and stares at him. “Get out, you idiot. You’re on MY side!"
religion joke priest confession church years confessional idiot murphy sins freezes stares get out
Rate: Dislike Like
Insults & Comebacks
Of course I talk like an idiot, how else would you understand me?
Calling you an idiot would be an insult to all the stupid people.
Your kid may be an honors student, but you’re still an idiot.
You are depriving some poor village of its idiot.
Hey, your village called – they want their idiot back.
Why is it acceptable for you to be an idiot but not for me to point it out?
Two Eskimos and a Kayak 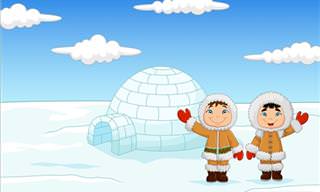 Two Eskimos sitting, paddling along in a kayak, when one felt a little chilly so he made a little pile of sticks and lit a fire in the craft. His friend shouted at him to put it out, but the warning was ignored. Unsurprisingly, the kayak sank quite quickly and finding themselves in the cold water, the second Eskimo whacked his idiot mate over the head with a now redundant paddle. "Ouch!!" said the previously warm Eskimo, "what did you do that for?!?" "Because, you idiot," said the second Eskimo, "Don't you know that you can't have your kayak and heat it too??"
friends heat warning water joke for kids fire idiot eskimo kayak sticks cold paddle paddling
Rate: Dislike Like
Puns
What did 2 tell 3 when he saw 6 acting like an idiot?
Don’t worry about him. He’s just a product of our times.
One Liners and Short Jokes
Not to brag, but I have sychic powers.

For example, right now you’re thinking, “It’s psychic, you idiot.”
Dad Jokes
I want to know what idiot called it a last will and testament.
It should’ve been called a dead giveaway.
Contact us | Help | About us | Terms | Privacy policy | Categories | Collections