A Tale of Two Pilots

An Airbus 380 is on its way across the Atlantic. It flies consistently at 800 km/h in 30,000 feet, when suddenly a Eurofighter with Tempo Mach 2 appears. The pilot of the fighter jet slows down, flies alongside the Airbus and greets the pilot of the passenger plane by radio: "Airbus flight, boring flight isn’t it? Take care and have a look here!” He rolls his jet on its back, accelerates, breaks through the sound barrier, rises rapidly to a dizzying height, only to swoop down almost to sea level in a breathtaking dive. He loops back next to the Airbus and asks, "Well, how was that?" The Airbus pilot answers: "Very impressive, but now have a look here!" The jet pilot watches the Airbus, but nothing happens. It continues to fly stubbornly straight, with the same speed. After five minutes, the Airbus pilot radioed, "Well, what are you saying now?" "What did you do?" Asked the confused fighter pilot. "I didn't see anything impressive." The other laughs and says, "I got up, stretched my legs, went to the back of the flight to the bathroom, got a cup of coffee and a cinnamon cake and made an appointment with the stewardess for the next three nights - in a 5 Star hotel, which is paid for by my employer. How did you like it?"
plane joke stewardess pilot cake hotel bathroom coffee flight appointment fighter pilot airbus cinnamon
Rate: Dislike Like
The New Blonde Stewardess 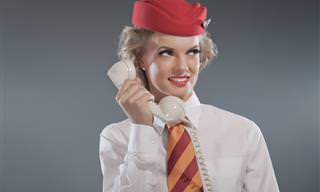 A new blonde stewardess began her first day. The route they were flying required that they make a stop in another city for the night. Soon after their arrival the captain showed all the flight attendants to their rooms. The next morning the pilot was preparing everyone to leave, and he noticed his new flight attendant was missing. He knew which room she was in at the hotel and called her up, as he was wondering what happened to her. She answered the phone, sobbing. "I can't get out of my room!" “You can’t get out of your room?” the captain asked, “Why not?” The stewardess replied, “There are only three doors in here,” she cried, “one is the bathroom, one is the closet, and one has a sign on it that says, ‘Do Not Disturb’!”
blonde joke flying phone captain stewardess pilot hotel stupidity joke room flight attendant route arrival
Rate: Dislike Like
A Dirty-Minded Captain 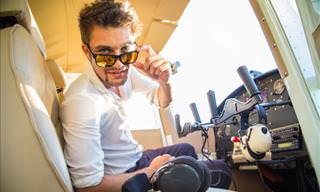 A jumbo jet is on its final approach coming in to Toronto Airport. The pilot comes on the intercom. "This is your Captain speaking. We're on our final descent into Toronto. I want to thank you for flying with us today and I hope you enjoy your stay in Toronto". He forgot to switch off the intercom. Now the whole plane can hear his conversation from the cockpit. The co-pilot says to the pilot, "Well, skipper, what you gonna do in Toronto?" "Well," says the skipper, "first I'm gonna check into the hotel and take a big crap ... then I'm gonna take that new stewardess with the huge tits out for dinner..... then I'm gonna wine and dine her, take her back to my room and give it to her big-time all night." Everyone on the plane hears this and immediately begins looking up and down the aisle trying to get a look at the new stewardess. Meanwhile the new stewardess is at the very back of the plane. She's so embarrassed that she starts to run to try and get to the cockpit to turn the intercom off. Halfway down the aisle, she trips over an old lady's bag and down she goes. The old lady leans over and says: "No need to hurry, dear. He's gotta use the bathroom first."
plane joke stewardess pilot
Rate: Dislike Like
The Rude Passenger

Years ago, a man needs to take a flight. As he gets to his plane seat, he is surprised to find a parrot strapped into the seat next to him Once in the air, the stewardess comes round and the man asks her for a coffee. The parrot meanwhile squawks: “And get me a bloody whisky, you moron.” The stewardess, somewhat taken aback, remains composed and brings a whisky for the parrot, but forgets the coffee. When the man points this out to her, the parrot immediately drains its glass and yells, “And get me another darn whisky while you’re at it, idiot!” Visibly upset, the shaking stewardess returns shortly with a whisky for the parrot, but still no coffee. Unaccustomed to such slackness, the man loses his temper and decides to try the parrot’s approach: “I’ve asked you twice for a coffee, moron, now go and get it or I’ll give you a slap!” In a couple of seconds, two burly disguised security personnel grab both him and the parrot, take them to the emergency exits and throw them out. As they are falling from the plane, the parrot turns to the man and says: “You know, for someone who can’t fly, you’ve got a big mouth.”
animal joke plane joke parrot whisky stewardess moron coffee idiot flight seat security rude parrot temper
Rate: Dislike Like
Contact us | Help | About us | Terms | Privacy policy | Categories | Collections