One Liners and Short Jokes
I was sitting there quietly, eating a bag of potato chips, when my wife came in and shouted at me…
''What's wrong with you, moron!?''

Years ago, a man needs to take a flight. As he gets to his plane seat, he is surprised to find a parrot strapped into the seat next to him Once in the air, the stewardess comes round and the man asks her for a coffee. The parrot meanwhile squawks: “And get me a bloody whisky, you moron.” The stewardess, somewhat taken aback, remains composed and brings a whisky for the parrot, but forgets the coffee. When the man points this out to her, the parrot immediately drains its glass and yells, “And get me another darn whisky while you’re at it, idiot!” Visibly upset, the shaking stewardess returns shortly with a whisky for the parrot, but still no coffee. Unaccustomed to such slackness, the man loses his temper and decides to try the parrot’s approach: “I’ve asked you twice for a coffee, moron, now go and get it or I’ll give you a slap!” In a couple of seconds, two burly disguised security personnel grab both him and the parrot, take them to the emergency exits and throw them out. As they are falling from the plane, the parrot turns to the man and says: “You know, for someone who can’t fly, you’ve got a big mouth.”
animal joke plane joke parrot whisky stewardess moron coffee idiot flight seat security rude parrot temper
Rate: Dislike Like
Will the Morons Please Stand Up 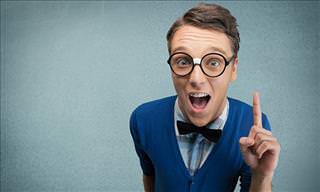 One day a college professor of Psychology was greeting his new college class. He stood up in front of the class and said, "Would everyone who thinks he or she is stupid please stand up?" After a minute or so of silence, a young man stood up. "Well, good morning. So, you actually think you're a moron?" the professor asked. The kid replied, "No sir, I just didn't want to see you standing there all by yourself."
professor comeback joke college moron
Rate: Dislike Like
Contact us | Help | About us | Terms | Privacy policy | Categories | Collections