Skeleton Puns
Why couldn't the skeleton get a date to the dance?
He doesn't have the heart to ask anyone out.
Kids Can Be Cruel... 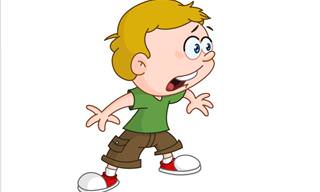 Little Timothy was a bright young boy, and he was even fairly handsome. The only problem was that he was lost his eye in a fishing accident when he was younger. His family was too poor to afford a glass eye, so his grandfather whittled him a wooden one. He was made fun of all through school for his eye and it completely destroyed his self esteem. But he was tired of letting the world get him down. The school dance was coming up and he would be darned if he didn't let himself have a good time. Timothy had eyes for a girl named Sally. She was shy and just as lonely as he was, due to having a fairly pronounced mustache, earning her the nickname, "Hair-lip". Well Timmy saw past her 'stache and thought she was the most beautiful girl in school, and he decided he was going to ask her out. He waited until lunch, and spotted her eating a peanut butter sandwich alone in the corner of the lunchroom. He marched up to her and said, "Sally, I've been seeing you around for a while, and, well... Would you like to go to the dance with me?" Sally's eyes lit up and she responded, "Would I!" "Hair-lip!" blurted Timothy and ran away.
boy kids children joke lonely girl bright wood eye hair lip dance sally timothy world school dance mustache
Rate: Dislike Like
Snake Puns
What is a snake’s favorite dance?
The Mamba.
Penguin Puns
Where do penguins go to dance?
The snow ball!
Where do penguins go to dance?
The snow ball.
Thanksgiving Jokes
What's the best dance to do on Thanksgiving? The turkey trot.
Rabbit Puns
What is a rabbit’s favorite dance? The bunny hop.
What is a rabbit’s favorite dance style? Hip-Hop!
Electricity Puns
What is the energy provider’s favorite dance? The electric slide.”
What is an energy provider’s favorite dance?
The electric slide.
Bat Puns
What happened if vampires came to a big dance?
A bat ball.
Easter Puns
"Oh, I wanna dance with some bunny, with some bunny who loves me."
Funny Limericks
Once I visited France,
And learned a new, awesome dance.
I twirled,
And I swirled,
And then I lost my pants.
There was an Old Person of Ischia,
Whose conduct grew friskier and friskier;
He dance hornpipes and jigs,
And ate thousands of figs,
That lively Old Person of Ischia.
Valentines Day Puns
What kind of dance do single people do on Valentine's Day?
The Independance!
Turkey Puns
What's the best dance to do on Thanksgiving? The turkey trot
Contact us | Help | About us | Terms | Privacy policy | Categories | Collections