Computer Puns
Why do cats like computers the best?
Cuz they have a mouse.
Nature Puns
What happens when it rains cats and dogs? You have to be careful not to step in a poodle!
The Skilled Cats 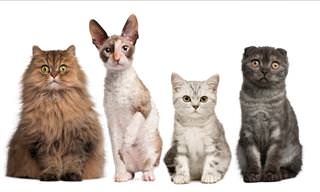 Four men were bragging about how smart their cats are. The first man was an engineer, the second man was an accountant, the third man was a chemist, the fourth was a Government Employee. To show off, the engineer called to his cat, "T-square, do your stuff." T-square pranced over to a desk, took out some paper and a pen and promptly drew a circle, a square, and a triangle. Everyone agreed that was pretty smart. But the accountant said his cat could do better. He called his cat and said, Spreadsheet, do your stuff." Spreadsheet went out into the kitchen and returned with a dozen cookies. He divided them into 4 equal piles of 3 cookies each. Everyone agreed that was good. But the chemist said his cat could do better. He called his cat and said, "Measure, do your stuff." Measure got up, walked over to the fridge, took out a quart of milk, got a 10-ounce glass from the cupboard and poured exactly 8 ounces without spilling a drop. Everyone agreed that was good. Then the three men turned to the government employee and said, "What can your cat do?" The government worker called to his cat and said, "Coffee Break, do your stuff." Coffee Break jumped to his feet, ate the cookies, drank the milk, crapped on the paper, screwed the other three cats, claimed he injured his back while doing so, filed a grievance report for unsafe working conditions, put in for Workers' Compensation and went home for the rest of the day on sick leave.
political joke government employee cats
Rate: Dislike Like
Weather Puns
There was a television channel ran by pets, the weather forecast was on and inclement weather was being predicted...
High chance of it raining cats and dogs, howling winds, and a possible purricane.
Deer Puns
It’s raining cats and dogs today - I just hope it doesn’t rain deer!
Witch Puns
What do witches' cats like to have for breakfast?
Mice crispies.
The Cat Statue 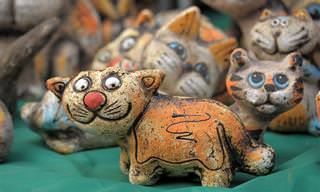 A man walks into an antique store and starts looking around. Suddenly, he gazes upon the most stunning bronze statue of a Siamese cat. He asks the store owner how much he wants for the statue. The store owner replies "It's $200 for the statue and $2000 for the story that goes with it." The man replies "I really don't care about the story, but I do want the statue." As the man is paying for the statue, the shop owner says "All right, but I guarantee you will be back for the story." The man walks out of the shop and starts down the street carrying the cat statue. When he comes to the crosswalk, he happens to glance behind him and sees 3 or 4 cats sitting about 10 feet away, looking at him. He shrugs it off and crosses when the light changes. He goes several more blocks and, at another crosswalk, looks behind himself again. This time there are about 30 cats sitting there looking at him. The man starts to get a little nervous and picks up his pace when the light changes. By the time the man reaches the pier at the end of the street, he has now been running for several blocks. He was running because every time he turned around, there were more and more cats behind him. He looked like the pied piper. When he got to the end of the pier, he turned around once more and saw at least 2000 cats sitting there looking at him. There were so many cats that there was no way to get off the pier without going through them and he knew there was no way he was going to do that. In a panic, he turned toward the water and heaved the statue as far as he could. Amazingly, all of the cats ran right past him and jumped in the water after the statue and never came out. The man, still shaking from his ordeal, immediately started running back to the shop. As he burst through the door, the shop owner saw him and said, "I told you that you'd be back for the story!" "To heck with the story," gasps the man, "do you have a statue of a politician??"
cats owner shop store story statue nervous suddenly pace Siamese antiques bronze ordeal shaking
Rate: Dislike Like
Funny Animal Quotes
“No matter how much cats fight, there always seem to be plenty of kittens." - Abraham Lincoln
“Time spent with cats is never wasted.”
Sigmund Freud
“I am fond of pigs. Dogs look up to us. Cats look down on us. Pigs treat us as equals.”
Winston Churchill
“Cats are smarter than dogs. You can’t get eight cats to pull a sled through snow.” —Jeff Valdez
“My relationships with my cats have saved me from a deadly, pervasive ignorance.”

- William S. Burroughs.
“Perhaps one reason we are fascinated by cats is because such a small animal can contain so much independence, dignity, and freedom of spirit. Unlike the dog, the cat’s personality is never bet on a human’s. He demands acceptance on his own terms.”

- Sigmund Freud
“Dogs come when they’re called; cats take a message and get back to you later.”

- Mary Bly.
“In ancient times cats were worshipped as gods; they have not forgotten this.”