150 Puns From All Walks of Life
Jokes > Tags > King Jokes

Ancient Greek Monster Puns
Why did king Minos put Minotaur inside a labyrinth?
He wanted to amaze his wife.
Family Puns
Did you know Stephen King has a son named Joe?
I’m not joking, but he is.
Gorilla Puns
Why wasn't King Kong able to climb to the top of the Empire State Building?
He couldn't quite fit in the elevator.
Why should you never fight a Gorilla?
They know king kong fu.
Divorce Puns
The king and queen of the animal kingdom were having marriage trouble.
"You're a cheetah!" said one to the other. "Oh yeah?" she replied,
"You're a lion!"
Knight Puns
Why did the king order his new castle be built in the evening?
For the night knights!
Where does King Arthur throw his stupid knights?
In the Dumbgeon.
What should be the name of the knight who the King has appointed to carry a census of the land? He goes by the name Sir Vey.
What is the name of the knight that spreads all the rumors and news of the court and the king amongst the people? Sir Culate.
Most of the knights of the round table of King Arthur were in their middle ages.
King Arthur had a knight in charge of determining property boundaries.
Sir Veyor
Who was King Arthur's alcoholic knight?
Sir Ohsis of the Liver
The fattest knight at King Arthur's round table was Sir Cumference.
He acquired his size from too much pi.
Food Pick Up Lines
I'll be Burger King and you be McDonald's. I'll have it my way, and you'll be lovin' it.
Giant Puns
Did you see that movie about King Kong, the giant ape?
The plot was pretty bananas.

The Cruel King and His Dogs 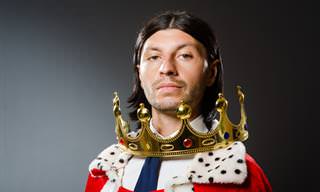 There once was a cruel king who enjoyed executing whoever he pleased. A minister once gave him wrong advice the king decided to have him killed. He ordered that the minister to be thrown to the ravenous and vicious guard dogs. The minister said, "I have served you loyally for 10 years and you do THIS?" The king was without mercy. The Minister fell on his knees pleaded, "Please give me 10 days before you throw me to the dogs." The king thought about it, weighed his curiosity vs. his blood lust, and finally agreed. In those 10 days the minister went to the keeper of the dogs and told him he wanted to feed the dogs for the next 10 days. The guard was baffled, but he agreed. So the minister started feeding the dogs, caring for them, washing them, providing all sorts of comforts for them. When the 10 days were up. The king ordered that the minister be thrown to the dogs as sentenced. When he was thrown in, everyone was amazed at what they saw. The ferocious dogs were wagging their tails, playing with the condemned minister and even licking his feet. The king was baffled at what he saw. "What happened to the my vicious dogs?!" He growled. The minister then said, "I served the dogs for only 10 days and they didn't forget my service. I served you for 10 years and you forgot all of it at my first mistake!" The King then realized his own great mistake. The next day, he replaced the dogs with crocodiles.
animal joke political joke dark humor minister king dogs cruel vicious sentenced wagging blood lust mercy.
Rate: Dislike Like
Want to start your day laughing? Register to our Daily Joke! Want to start your day laughing? Register to our Daily Joke!
Did you mean:
Continue With: Facebook Google
By continuing, you agree to our T&C and Privacy Policy
Contact us | Help | About us | Terms | Privacy policy | Categories | Archive | Collections