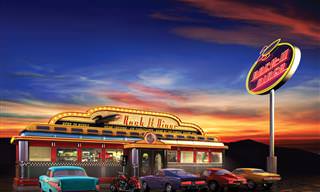 A trucker came into a truck stop coffee shop and placed his order. He said, "I want three flat tires, a pair of headlights and pair of running boards." The brand new blonde waitress, not wanting to appear stupid, went to the kitchen and said to the cook, "This guy out there just ordered three flat tires, a pair of headlights and a pair of running boards. What does he think this place is, an auto parts store?" "No," the cook said. "Three flat tires mean three pancakes, a pair of headlights is two eggs sunny side up, and running boards are 2 slices of crisp bacon." "Oh, OK!" said the blonde. She thought about it for a moment and then spooned up a bowl of beans and gave it to the customer. The trucker asked, "What are the beans for, Blondie?" She replied, "I thought while you were waiting for the flat tires, headlights and running boards, you might as well gas up!"
business joke eggs trucker beans flat tire cook gas waitress bacon pancake coffee shop headlights
Rate: Dislike Like
Coffee Puns
What's the best Beatles' song to play at a coffee shop? Latte Be.
What do you call it when you walk into a coffee shop and feel like you've been there before? Déja-brew.
A Fresh Cup of Coffee 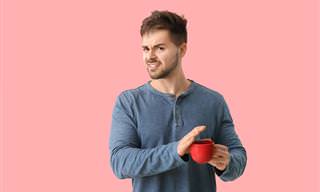 A young man dressed walks tall through the doors of the local coffee shop one Sunday morning. He sits lazily and looks the place up and down before raising his hand and summoning a waiter. "I would like your FRESHEST coffee, none of that muddy stuff you probably usually make from yesterday's leftovers." The waiter assured him they make fresh coffee many times per day. "I'll believe it when I taste it." Said the young man. "I'm from New York and I know good coffee. There's very little chance you've got good coffee here, so at least make a new batch for me." and he shoos him away. The waiter goes to the kitchen and comes back with a cup of steamy coffee. The man tastes it and immediately makes a disgusted face. "Just what I thought, that's not FRESH. Come on, make me another one!" The waiter goes back to the kitchen and indeed takes some time to return. Upon his return he is holding a steaming and aromatic coffee cup. The waiter gives the gentleman the cup and he takes a sip... before spitting it out immediately. He turns to the waiter and shouts, “This is way worse! This coffee tastes like mud!” The waiter, looking surprised, turns to the man and says, “But, sir, it’s fresh ground!”
waiter rich man comeback joke spitting coffee cup kitchen taste coffee shop mud fresh shoos aromatic steamy
Rate: Dislike Like
The Drunkard and the Coffee Shop Owner 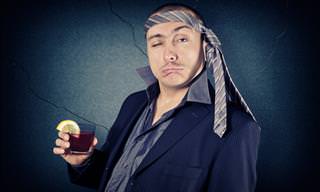