Chess Puns
What did Michael Jackson say to his chess opponent?
“It don’t matter if you’re black or white.”
What's a chess player's favourite starter?
Pawn cocktail.
I was watching a chess champion vs a boxing champion match.
The chess player had a mean right rook!
My favourite piece in chess is the rook
It is the most straight-forward.
When I first started playing chess, I thought the castle could move diagonally.
Classic rook-y mistake.
I went on a date with a Chess World Champion the other night.
It took her about 10 minutes to pass the salt.
Where do chess grandmasters keep their pet snakes?
In a chesst.
I've recently got a job making chess pieces.
I'm mostly working knights.
What did the Australian Chess player say about the mouldy bread?
"Stalemate."
I like playing chess with old people in the park, but it gets hard to find 32 of them each time.
What do you call a girl who's very good at human chess and checkers?
Ingrid.
I don't know where I put my queen after the last chess game.
Maybe she's lost I need to check.
My last chess game went a bit medieval.
We both went for the castle.
What did one pirate say to the other when he beat him in chess.
Check matey!
What do chess players from the Czech Republic call their friends?
Czech-mates.
Never Remarry 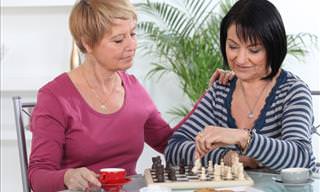 Lucy and Debra were having one of their chats during one of their regular Thursday outings to play some chess, talk and get some good coffee. At one point, Lucy sighed and said, “You know, Debra , if something every happened to my Paul, I don’t think I could ever marry again.” Debra nodded sympathetically. “I know what you mean,” she said. “Once is enough for me too.”
joke about men marriage joke relationship marriage coffee chess
Rate: Dislike Like
Contact us | Help | About us | Terms | Privacy policy | Categories | Collections