Dragon Puns
Why did the pre-pubescent dragon lose the rap battle?
He couldn't spit hot fire yet.
The Battle of the Lake 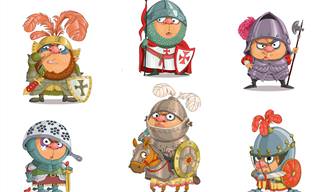 There were three kingdoms, each bordering on the same lake. For centuries, these kingdoms had fought over an island in the middle of that lake. One day, they decided to have it out, once and for all. The first kingdom was quite rich and sent an army of 25 knights, each with three squires. The night before the battle, the knights jousted and cavorted as their squire's polished armor, cooked food, and sharpened weapons. The second kingdom wasn't so wealthy and sent only 10 knights, each with 2 squires. The night before the battle, the knights cavorted and sharpened their weapons as the squire's polished armor and prepared dinner. The third kingdom was very poor and only sent one elderly knight with his sole squire. The night before the battle, the knight sharpened his weapon, while the squire, using a noosed rope, slung a pot high over the fire to cook while he prepared the knight's armor. The next day, the battle began. All the knights of the first two kingdoms had cavorted a bit too much (one should never cavort while sharpening weapons and jousting) and couldn't fight. The squire of the third kingdom couldn't rouse the elderly knight in time for combat. So, in the absence of the knights, the squires fought. The battle raged well into the late hours, but when the dust finally settled, a solitary figure limped from the carnage. The lone squire from the third kingdom dragged himself away, beaten, bloodied, but victorious. It just goes to prove, the squire of the high pot and noose is equal to the sum of the squires of the other two sides.
rich dad joke lake night kingdom knight weapon battle wealthy pot noose border squire cavort sharpening
Rate: Dislike Like
Insults & Comebacks
I was hoping for a battle of wits but you appear to be unarmed.
Dragon Jokes
Why did the pre-pubescent dragon lose the rap battle?
He couldn't spit hot fire yet.
Cow Puns
What do you call it when cows do battle in outer space?
Steer Wars.
Contact us | Help | About us | Terms | Privacy policy | Categories | Collections