The Bungee Jump in Mexico 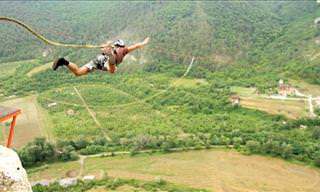 Two guys are bungee-jumping one day. The first guy says to the second. "You know David, we could make a lot of money running our own bungee-jumping service in Mexico." David thinks this is a great idea, so the two pool their money and buy everything they’ll need – a tower, an elastic cord, insurance, etc. They travel to Mexico and begin to set up on the square. As they are constructing the tower, a crowd begins to assemble. Slowly, more and more people gather to watch them at work. The first guy jumps... He bounces at the end of the cord, but when he comes back up, the David notices that he has a few cuts and scratches. Unfortunately, David isn’t able catch him, he falls again, bounces and comes back up again. This time, he is bruised and bleeding. Again, David misses him. The first guy falls again and bounces back up. This time, he comes back pretty messed up – he’s got a couple of broken bones and is almost unconscious. Luckily, David finally catches him this time and says, "Arquette! What happened? Was the cord too long?" The first guy lifts his head weakly and says, "No, the cord was fine. But David, tell me... what the heck is a piñata?"
Mexico bungee jump Mexican joke dad joke tower luckily constructingת piñata unconscious bones broken
Rate: Dislike Like
Italy Puns
I saw this beautiful tower in Italy..
It was a Pisa art!
The Leaning Tower of Pisa is in Italy
So it’s italicized!
Pizza Puns
Where do pepperonis go on vacation?
The Leaning Tower of Pizza.
Phone Puns
My wife and I got married under a cell phone tower.
The ceremony wasn't great, but the reception was perfect.
Medieval Puns
I read that in medieval times, if you lost your castle to invaders during a siege, it was incredibly unlikely that you'd get the well-fortified tower area back.
Guys back then were playing for keeps.
Pick Up Lines
Are you a tower? Because eiffel for you!
Australian Pick Up Lines
That's right; I'm as breathtaking as the Sydney Tower.
Corona Virus Jokes
People with a cold - "I just want to stay in bed and do nothing, I feel terrible."