Bread Puns
Why was the baker in a serious panic? He thought that he was in a loaf or death situation.
Dad Jokes
I was really embarrassed when my wife caught me playing with my son's train set by myself. In a moment of panic, I threw a bedsheet over it. I think I managed to cover my tracks.
Is This Really Necessary? 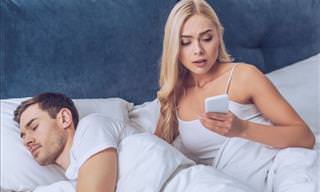 Ted comes home blackout drunk, as he does most nights. With his eyes barely open, he misses his friend Carl in bed on top of his wife. He lies down and instantly passes out. Carl panics and tries to run but the wife stops him and whispers: "Don't go, this moron is so drunk he won't even feel me plucking a hair on his butt." The wife does exactly that and the husband doesn't move. Carl, now reassured, proceeds with the job. Half an hour later Ted moves a bit, and Carl is just about to freak out, the wife stops him and plucks another hair from his buttocks. Another hour later Carl is still going at it. After a while, just to be sure, he plucks another hair from Ted's butt. Ted then moves around a bit and mumbles: "Look man, I don't mind you screwing my wife, but do you really need to keep score on my bum?"
husband wife rude marriage cheating lovemaking drunk bed panic butt hair
Rate: Dislike Like
The Non-Kosher Rabbi 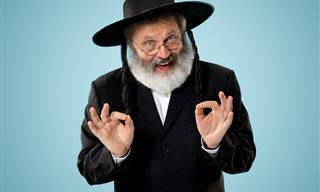 An orthodox Rabbi walks into a restaurant. It’s not a kosher place, but he thinks “what the heck, why not? I should try one time in my life” He asks for a seat outside. He looks at the menu, and decides if he’s gonna eat non-Kosher food, he’s going to do it in the biggest way possible. He orders a whole, roasted suckling pig, complete with multiple sauces and an apple in its mouth. The dish comes out, and just as the waiter is setting it as his table, the rabbi sees one of his congregants walking towards him on the sidewalk. The rabbi is terrified of being caught. Panicking, he shouts out “Would you look how they serve an apple here??”
food restaurant rabbi religion joke pig panic apple table orthodox kosher roasted pig sauces congregants
Rate: Dislike Like
The Music of the Rainforest 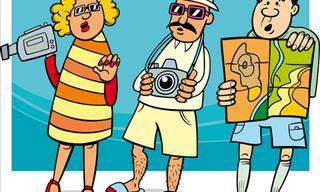 Some European explorers were traveling through the Amazon rainforest with some natives as guides... when they started hearing drums in the distance. Puzzled the Europeans inquired, “we hear drums? What does that mean?” The Natives answered, “When drums stop, very bad.” Reluctantly the exploration continues. After 5 minutes the drums had started getting louder and the explorers started getting nervous. “The drums sound closer, and we think they are getting louder! What does it mean?” “When drums stop, very bad.” Doing their best to maintain composure the Europeans kept moving. About 5 minutes later the drums abruptly stop and the explorers panic. “The drums have stopped! What should we do?!” “When drums stop, very bad, now comes bass solo.”
dad joke panic nervous amazon bass drums guide solo exploration rainforest natives reluctantly
Rate: Dislike Like
Contact us | Help | About us | Terms | Privacy policy | Categories | Collections