Hockey Puns
In Quebec they used to practise throwing the puck in the zone, and then
sitting back to wait for a turnover. But eventually the players were
criticized for this dump-and-chaise tactic.
Funny Limericks
There once was a boy named Dan,
who wanted to fry in a pan.
He tried and he tried,
and eventually died,
that weird little boy named Dan.
The Familiar Old Man 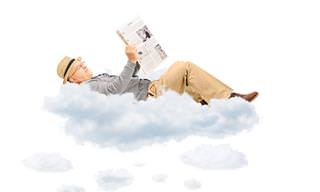 One day when Jesus was relaxing in Heaven, He happened to notice a familiar-looking old man. Wondering if the old man was His father Joseph, Jesus asked him, "Did you, by any chance, ever have a son?" "Yes," said the old man, "but he wasn't my biological son. He was born by a miracle, by the intervention of a magical being from the heavens." "Very interesting," said Jesus. "Did this boy ever have to fight temptation?" "Oh, yes, many times," answered the old man. "But he eventually won. Unfortunately, he heroically died at one point, but he came back to life shortly afterwards." Jesus couldn't believe it. Could this actually be HIS father? "One last question," He said. "Were you a carpenter?" "Why yes," replied the old man. "Yes I was!" Jesus rubbed His eyes and said, "Dad?" The old man rubs tears from his eyes and said, "Pinocchio?"
old man father religion joke heaven jesus fight eventually relaxing afterwards carpenter temptation rubs
Rate: Dislike Like
Dolphin Puns
Evolution is so strange. Dolphins started off as sea creatures, then evolved to have legs, only to eventually return to the sea and lose them.
Kinda defeets the porpoise, don't you think?
Dirty Short Jokes
What is the difference between an illegal immigrant and E.T.? E.T. eventually went home.
Dark Short Jokes
If I had a dollar for every girl that found me unattractive, they would eventually find me attractive.
A guy is due to meet his friends for drink at a bar but arrives late. When he does eventually turn up his friends ask why he is late.

The guy says, “Well, you won’t believe what just happened. I was walking my usual route via the rail tracks when suddenly I saw a young, naked woman tied up next to the tracks. Of course I untied her and we had sex because I freed her.”

The friends are cheering and one friend asks, “So… did you get any head?”

The guy replies, “No, I couldn’t find it.”
Quotes
“When I eventually met Mr. Right I had no idea that his first name was Always.”
Rita Rudner
Turkey Puns
My wife has been giving me a hard time about my drinking. Eventually, I agreed to quit cold turkey.
Never cared for leftovers anyway.
Jokes For Women
How are splinters better than a man?
Splinters are a pain, but they go away eventually.
Contact us | Help | About us | Terms | Privacy policy | Categories | Collections