101 Jokes and One Liners for Kids!
Jokes > Tags > Grandma Jokes

Wine Puns
Why does your grandma like wine so much?
Because at her age, she needs glasses!
One Liners for Kids
What do you call having your grandma on speed dial? Instagram.
Sheep Puns
What is a grandma sheep called?
A baaaa-nana

A Senior in Court 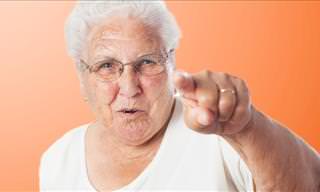 Lawyers should never ask a Southern grandma a question if they aren't prepared for the answer. In a trial, a Southern small-town prosecuting attorney called his first witness, a grandmotherly, elderly woman to the stand. He approached her and asked, "Mrs. Jones, do you know me?" She responded, "Why, yes, I do know you, Mr. Williams. I've known you since you were a young boy, and frankly, you've been a big disappointment to me. You lie, you cheat on your wife, and you manipulate people and talk about them behind their backs. You think you're a big shot when you haven't the brains to realize you never will amount to anything more than a two-bit paper pusher. Yes, I know you." The lawyer was stunned! Not knowing what else to do, he pointed across the room and asked, "Mrs. Jones, do you know the defense attorney?" She again replied, "Why, yes, I do. I've known Mr. Bradley since he was a youngster, too. He's lazy, bigoted, and he has a drinking problem. He can't build a normal relationship with anyone and his law practice is one of the worst in the entire state. Not to mention he cheated on his wife with three different women. One of them was your wife. Yes, I know him." The defense attorney almost died. The judge asked both counselors to approach the bench and, in a very quiet voice, said, "If either of you idiots asks her if she knows me, I'll send you both to the electric chair."
lawyer old lady judge grandma
Rate: Dislike Like

Granny's Day on the Highway 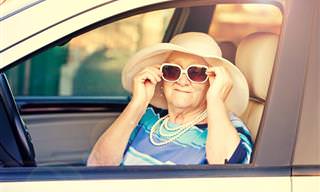 Dear Grand-daughter, The other day I went up to our local Christian book store and saw a 'Honk if you love Jesus' bumper sticker. I was feeling particularly sassy that day because I had just come from a thrilling choir performance, followed by a thunderous prayer meeting. So, I bought the sticker and put it on my bumper. Boy, am I glad I did; what an uplifting experience that followed. I was stopped at a red light at a busy intersection, just lost in thought about the Lord and how good he is, and I didn't notice that the light had changed. It is a good thing someone else loves Jesus because if he hadn't honked, I'd never have noticed. I found that lot of people love Jesus! While I was sitting there, the guy behind started honking like crazy, and then he leaned out of his window and screamed, 'For the love of God!' 'Go! Go! Go! Jesus Christ, GO!' What an exuberant cheerleader he was for Jesus! Everyone started honking! I just leaned out my window and started waving and smiling at all those loving people. I even honked my horn a few times to share in the love! There must have been a man from Florida back there because I heard him yelling something about a sunny beach. I saw another guy waving in a funny way with only his middle finger stuck up in the air. I asked my young teenage grandson in the back seat what that meant. He said it was probably a Hawaiian good luck sign or something. Well, I have never met anyone from Hawaii, so I leaned out the window and gave him the good luck sign right back. My grandson burst out laughing. Why even he was enjoying this religious experience!! A couple of the people were so caught up in the joy of the moment that they got out of their cars and started walking towards me. I bet they wanted to pray or ask what church I attended, but this is when I noticed the light had changed. So, grinning, I waved at all my brothers and sisters, and drove on through the intersection. I noticed that I was the only car that got through the intersection before the light changed again and felt kind of sad that I had to leave them after all the love we had shared. So I slowed the car down, leaned out the window and gave them all the Hawaiian good luck sign one last time as I drove away. Praise the Lord for such wonderful folks! Love, Grandma
senior joke love honk jesus grandma sad wonderful religious hawaiian folks good luck middle finger
Rate: Dislike Like
Turtle Puns
Grandma runs the kitchen like a turtle-tarian; give her some space there. 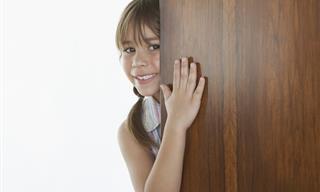 A 5-year old girl went to visit her grandmother one day. She played with her dolls as grandma dusted the furniture. At one point, she looked up and asked:  "Grandma, how come you don't have a boyfriend?" Grandma replied: "Honey, my TV is my boyfriend. I can sit in my bedroom and watch it all day long. The TV evangelists keep me company and make me feel so good. "The comedies make me laugh. I'm so happy with my TV as my boyfriend." Grandma turned on the TV and the picture was horrible. She started adjusting the knobs trying to get the picture in focus. Frustrated, she started hitting the back of the TV hoping to fix the problem. The little girl heard the doorbell ring so she hurried to open the front door. When she opened the door, there stood Grandma's minister. The minister said: "Hello young lady. Is your grandma home?" The little girl replied: "Yeah, she's in the bedroom bangin' her boyfriend."
family joke children joke minister grandma tv honey boyfriend evangelist comedies
Rate: Dislike Like
Want to start your day laughing? Register to our Daily Joke! Want to start your day laughing? Register to our Daily Joke!
Did you mean:
Continue With: Facebook Google
By continuing, you agree to our T&C and Privacy Policy
Contact us | Help | About us | Terms | Privacy policy | Categories | Archive | Collections
Login
Already registered?
Enter your email address and get full access.
Did you mean:
Not a member? Click Here
Personal Details