Arm Puns
A fly fell down out of nowhere on my wrist
It died on my watch.
One Liners and Short Jokes
Mama fly and baby fly were hanging out at the coroner’s office. The coroner was enjoying a sandwich while he performed an autopsy. Baby fly landed on the sandwich as the coroner took a bite. Mama fly jumped into action and hit the man in the eye and baby fly escaped out of his mouth.
. Mama fly looked into baby fly’s eyes and said,

“Nobody puts baby in a coroner.”
Whale Puns
Which type of whale can fly?
Pilot whales.
Frog Puns
Why are frogs good at baseball?
Because they catch a lot of fly balls.
The Jewish Samurai 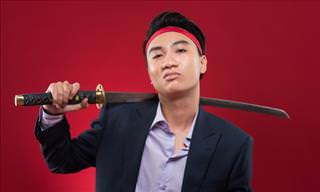 Once upon a time, a powerful Emperor of the Rising Sun advertised for a new Chief Samurai. After a year, only three applied for the job: a Japanese, a Chinese and a Jewish Samurai. "Demonstrate your skills!" commanded the Emperor. The Japanese samurai stepped forward, opened a tiny box and released a fly. He drew his samurai sword and *Swish!* the fly fell to the floor, neatly divided in two! "What a feat!" said the Emperor. "Number Two Samurai, show me what you do." The Chinese samurai smiled confidently, stepped forward and opened a tiny box, releasing a fly. He drew his samurai sword and *Swish! *Swish!* The fly fell to the floor neatly quartered. "That is skill!" nodded the Emperor. "How are you going to top that, Number three Samurai?" The Jewish samurai, Yoku Cohen, stepped forward, opened a tiny box releasing one fly, drew his samurai sword and *Swoosh!* flourished his sword mightily, but the fly was still buzzing around! In disappointment, the Emperor said, "What kind of skill is that?? The fly isn't even dead." "Dead?" replied Cohen in contempt. "Dead is easy. Now circumcision, that takes skill."
religion Jewish samurai Japan circumcision box fly sword emperor cohen swoosh flourish disappointment
Rate: Dislike Like
Fishing Puns
What did one hillbilly say to another? I got a new fly rod and reel for my wife. Best trade I ever made.
Christmas Puns
How does santa get his Reindeer to fly? He uses Red Bull because it gives you wings!
Bat Puns
Why did the cat want to learn to fly?
She wanted to try bats.
Eye Puns
What do you call an eye that can fly?
A real eye soar.
Anti Jokes
Have you ever noticed that when geese fly in a ‘V’ formation, one line is always longer than the other? That's because there are more geese in that line.
Electricity Puns
At what point will you love to change your bulbs the most?
When sparks fly.
Cactus Puns
Scientists have genetically modified a Venus Fly Trap to have the skin of a cactus
They say its bark is worse than its bite.
Penguin Puns
Why don’t penguins fly?
They are not tall enough to be pilots.
Insults & Comebacks
Fly like a butterfly sting like a bee I slept with yo mama now it burns when I pee.
Rabbit Puns
Where do rabbits learn how to fly? In the hare force!
Bacon Puns
What would happen if pigs could fly? The price of bacon would go skyrocket.
Contact us | Help | About us | Terms | Privacy policy | Categories | Collections