Food Quotes
“All my life I thought air was free until I bought a bag of chips.”
― Unknown 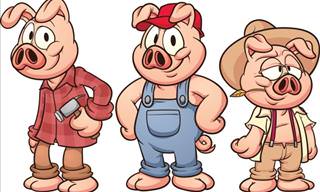 The animal I really dig, Above all others is the pig. Pigs are noble. Pigs are clever, Pigs are courteous. However, Now and then, to break this rule, One meets a pig who is a fool. What, for example, would you say, If strolling through the woods one day, Right there in front of you you saw A pig who'd built his house of STRAW? The Wolf who saw it licked his lips, And said, 'That pig has had his chips.' 'Little pig, little pig, let me come in!' 'No, no, by the hairs on my chinny-chin-chin!' 'Then I'll huff and I'll puff and I'll blow your house in!' The little pig began to pray, But Wolfie blew his house away. He shouted, 'Bacon, pork and ham! Oh, what a lucky Wolf I am!' And though he ate the pig quite fast, He carefully kept the tail till last. Wolf wandered on, a trifle bloated. Surprise, surprise, for soon he noted Another little house for pigs, And this one had been built of TWIGS! 'Little pig, little pig, let me come in!' 'No, no, by the hairs on my chinny-chin-chin!' 'Then I'll huff and I'll puff and I'll blow your house in!' The Wolf said, 'Okay, here we go!' He then began to blow and blow. The little pig began to squeal. He cried, 'Oh Wolf, you've had one meal! Why can't we talk and make a deal? The Wolf replied, 'Not on your nelly!' And soon the pig was in his belly. 'Two juicy little pigs!' Wolf cried, 'But still I'm not quite satisfied! I know how full my tummy's bulging, But oh, how I adore indulging.' So creeping quietly as a mouse, The Wolf approached another house, A house which also had inside A little piggy trying to hide. 'You'll not get me!' the Piggy cried. 'I'll blow you down!' the Wolf replied. 'You'll need,' Pig said, 'a lot of puff, And I don't think you've got enough.' Wolf huffed and puffed and blew and blew. The house stayed up as good as new. 'If I can't blow it down,' Wolf said, I'll have to blow it up instead. I'll come back in the dead of night And blow it up with dynamite!' Pig cried, 'You brute! I might have known!' Then, picking up the telephone, He dialed as quickly as he could The number of red Riding Hood. 'Hello,' she said. 'Who's speaking? Who? Oh, hello, Piggy, how d'you do?' Pig cried, 'I need your help, Miss Hood! Oh help me, please! D'you think you could?' 'I'll try of course,' Miss Hood replied. 'What's on your mind...?' 'A Wolf!' Pig cried. 'I know you've dealt with wolves before, And now I've got one at my door!' 'My darling Pig,' she said, 'my sweet, That's something really up my street. I've just begun to wash my hair. But when it's dry, I'll be right there.' A short while later, through the wood, Came striding brave Miss Riding Hood. The Wolf stood there, his eyes ablaze, And yellowish, like mayonnaise. His teeth were sharp, his gums were raw, And spit was dripping from his jaw. Once more the maiden's eyelid flickers. She draws the pistol from her knickers. Once more she hits the vital spot, And kills him with a single shot. Pig, peeping through the window, stood And yelled, 'Well done, Miss Riding Hood!' Ah, Piglet, you must never trust Young ladies from the upper crust. For now, Miss Riding Hood, one notes, Not only has two wolfskin coats, But when she goes from place to place, She has a PIGSKIN TRAVELING CASE.
animal joke pig teeth hair funny poem ham chin roald dahl wolf chips bacon pork lady riding hood
Rate: Dislike Like
Computer Puns
My computer became self aware and asked for a snack.
I replied, "Sorry I'm fresh out of computer chips."
Onion Puns
What kind of chips do you eat in the bath?
Shower cream and onion.
Cookie Puns
What kind of cookies do vulcans love? Spockolate chips.
When should you take a cookie to the doctor? When it feels crummy. What do the cookie and the computer have in common? They both have chips.
Potato Puns
When potato chips don’t sell fast enough, the maker knows it will soon be crunch time.
Grocery Store Pick Up Lines
You can have that last bag of chips if I can bag your number.
Baby, you better get out of that express lane, 'cause you're all that *and* a bag of chips.
Vaccine Puns
I heard the government is going to put chips inside people with Covid vaccines...
I hope I get Doritos.
Monkey Puns
What do you call a monkey that sells potato chips?
A chipmunk.
Beaver Puns
Do you know what a beavers' favorite snack is? Wood chips.
Food puns
Why do you always bring a bag of chips to a party? In queso emergency.
Cheese Puns
Why should you always bring a bag of tortilla chips to a party?
In queso emergency.
One Liners and Short Jokes
So I attended a salsa class today
The instructor says to everyone: "Alright folks, who's ready to learn how to dance??"

I realized that there was a misunderstanding, and ran off with my bag of tortilla chips.
I was sitting there quietly, eating a bag of potato chips, when my wife came in and shouted at me…
''What's wrong with you, moron!?''