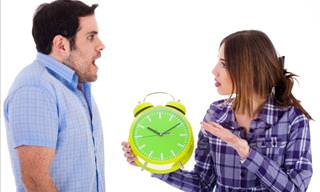 One day, a gentleman's wife is planning on hosting a dinner party and wants to class it up a bit, so she sends her husband out to pick up some snails for escargot. He picks up the snails and starts heading home, but on the way, the gentleman runs into an old friend and stops to chat for a minute. The two get to chatting and the friend suggests, "Wanna grab a pint?" To which the man replies, "No, I should really be getting back, my wife'll be pissed if I'm late for her dinner." So after some more minor prodding the man, of course, goes out for the one, snails in hand. The fellas get to drinking and lose track of time, drinking into the night until the man looks up at the clock and realizes, "Oops! I'm 4 hours late for the darn dinner!" So he snatches up his bag of snails and tears down the street to home. As the man starts up his walk, stumbling and plastered, he trips on the front steps, raising a cacophony of sound and alerting his wife to his beleaguered presence. She slams open the door, looks down at the drunk, and darn near explodes. "Where the hell have you been?! You're four hours late for dinner! Explain yourself, ya drunk bastard!" The man, knowing he's screwed and looking down at his sad state and the snails scattered all about, decides to take the chance. Raising his fist and adopting a motivational tone, he says with a dare, "Five feet more lads, we're almost there!"
bar hell marriage joke dinner bastard drunk gentleman beleaguered pint snails cacophony presence realize
Rate: Dislike Like
Funny Poems
Funny Poems Page 1

One evening I wrote to John and I guess I was expressing my frustrations with not having enough time as I had a briefcase full of work to do that evening. Jaymac, in his wisdom, sent me back the following funny but inspirational poem:

Many times during my career I let my work control my life. Looking back at the times where I allowed my work to create stress and frustration in my life I now realize what I thought was important really was not. I am not say
Contact us | Help | About us | Terms | Privacy policy | Categories | Collections