Penguin Puns
What does a magician penguin say?
“Pick a cod, any cod…”
Have You Met the Van Gogh Family? 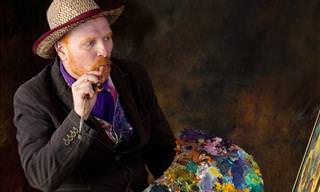 Did you know the painter Vincent van Gogh had a very large family? There's his dizzy aunt, Verti Gogh The brother who ate prunes, Gotta Gogh The brother who worked at a convenience store, Stop N Gogh The grandfather from Yugoslavia, U Gogh His magician uncle, Wherediddy Gogh His Mexican cousin, A Mee Gogh The Mexican cousin's American half brother, Gring Gogh The nephew who drove a stage coach, Wellsfar Gogh The constipated uncle, Can't Gogh The ballroom dancing aunt, ang Gogh The bird lover uncle, Flamin Gogh The fruit loving cousin, Man Gogh An aunt who taught positive thinking, WaytoGogh The little bouncy nephew, Poe Gogh A sister who loved disco, Go Gogh And his niece who travels the country in an RV, Winnie Bay Gogh I saw you smiling, there ya Gogh!
family joke aunt magician Mexican dad joke yugoslavia gogh vincent van gogh constipated ballroom prunes dizzy
Rate: Dislike Like
Romantic Pick Up Lines
You must be a magician, because every time I look at you, everyone else disappears.
Rabbit Puns
Why did the magician have to cancel his show? Because he just washed his hare and couldn’t do a thing with it.
Soccer Puns
There is one commonality between a magician and a soccer player. They both do hat tricks.
The Magician and the Parrot

There was once a magician on a cruise ship who performed mainly slight-of-hand tricks. He had a regular spot on the ship's evening entertainment. He was actually quite a good magician, but his routines were regularly ruined by the on-board parrot who would fly around squawking out and giving away his secrets like: "IT'S UP HIS SLEEVE, IT'S UP HIS SLEEVE!", or "IT'S IN HIS POCKET, IT'S IN HIS POCKET!", or "IT'S IN HIS MOUTH, IT'S IN HIS MOUTH!" The magician was getting pretty sick of this and threatened to kill the parrot if it ruined his act one more time. That evening right at the climax of his act, just as he was about to disappear in a puff of smoke, the ship hit an iceberg and sank in seconds. Amazingly, the magician and the parrot were the only two survivors. The magician was lying on a piece of driftwood in a daze. As he opened his eyes he could see the parrot staring at him out of its beady little eye. The parrot sat there for hours just staring at him and eventually said, "OK, I give up, what did you do with the ship?"
animal joke magician ship parrot joke animal
Rate: Dislike Like
Which Substance Would You Like to Land in? 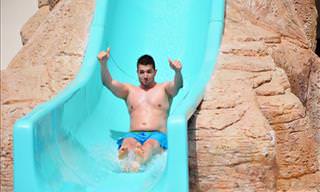 Three men were trekking through the desert and came across a magician. The magician was standing at the top of a slide. The magician than said, ''You may each go down the slide, asking for a drink. When you reach the bottom of the slide you shall land in a huge glass of that drink. The first man went down yelling, ''beerrr!!!'' Plop! He landed in a glass of beer. The second guy went down the slide yelling ''lemonadeee!!!'' Plop! He landed in a glass of lemonade. The third guy went down the slide yelling ''wheeeeeeeee!!!''' He instantly regretted it.
magician stupidity joke water slide
Rate: Dislike Like
One Liners and Short Jokes
Once upon a time a Mexican magician performed in a magic show.
He counted:

And disappeared without a trace.
I was at a magic show, when after one particularly amazing trick, someone screamed out, "wow, how did you do that."
I would tell you", answered the magician predictably, "but then I'd have to kill you."
After a moments pause the same voice screamed out "can you tell my mother in law?"
Avocado Puns
What do magician avocados say?
Avocadabra!
One Liners for Kids
What do you call a magician that lost his magic?
Ian.
What do you call a magician on a plane? A flying sorcerer!
Fishing Puns
What do you call a small fish magician? A magic carpet
What did the fisherman say to the card magician? Take a cod, any cod.
What did the magician say to the fisherman?
"Pick a cod, any cod."
Contact us | Help | About us | Terms | Privacy policy | Categories | Collections