The Parrot and the New House 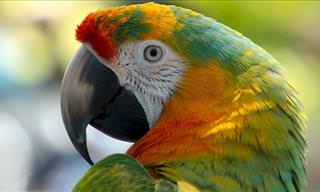 A woman went to a pet shop and immediately spotted a large beautiful parrot. There was a sign on the cage that said $50.00. "Why so little?" she asked the pet store owner. The owner looked at her and said: "Look, I should tell you first that this bird used to live in a brothel, and sometimes it says some pretty vulgar things." The woman thought about this but decided she wanted the bird anyway. She took it home, hung its cage in her living room and waited for it to say something. The bird looked around the room, then at her, and said: "New house, new madam." The woman was a bit shocked at the implication, but then thought: "that's not so bad." When her two teenage daughters returned from school. The bird saw them and said, "New house, new madam, new girls." The girls and the woman were a bit offended but then began to laugh about the situation. Moments later, the woman's husband came home from work. The bird looked at him and said: "New house, new madam, new girls - old clients!"
animal joke brothel parrot joke animal
Rate: Dislike Like
The Magician and the Parrot

There was once a magician on a cruise ship who performed mainly slight-of-hand tricks. He had a regular spot on the ship's evening entertainment. He was actually quite a good magician, but his routines were regularly ruined by the on-board parrot who would fly around squawking out and giving away his secrets like: "IT'S UP HIS SLEEVE, IT'S UP HIS SLEEVE!", or "IT'S IN HIS POCKET, IT'S IN HIS POCKET!", or "IT'S IN HIS MOUTH, IT'S IN HIS MOUTH!" The magician was getting pretty sick of this and threatened to kill the parrot if it ruined his act one more time. That evening right at the climax of his act, just as he was about to disappear in a puff of smoke, the ship hit an iceberg and sank in seconds. Amazingly, the magician and the parrot were the only two survivors. The magician was lying on a piece of driftwood in a daze. As he opened his eyes he could see the parrot staring at him out of its beady little eye. The parrot sat there for hours just staring at him and eventually said, "OK, I give up, what did you do with the ship?"
animal joke magician ship parrot joke animal
Rate: Dislike Like
Want to start your day laughing? Register to our Daily Joke! Want to start your day laughing? Register to our Daily Joke!
Continue With: Facebook Google Use Email
By continuing, you agree to our T&C and Privacy Policy
Contact us | Help | About us | Terms | Privacy policy | Categories | Collections