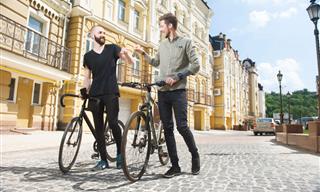 A man bumps into an old high school friend he hadn't seen for a number of years. His old friend was notorious for bragging back in high school - about his possessions, achievements and relationships, so he wondered if much had changed in the time since he last saw him. It wasn't long before the man realized his old friend hadn't changed much at all - on and on he rambled, talking about his amazing job, his huge mansion and the new Porsche he'd just bought himself. At one point, the old friend pulls out a photograph of his wife and shows it to the man. "She's beautiful, isn't she?" the old friend asks. "If you think she's gorgeous, you should see my girlfriend," replies his exhausted friend. "Why? Is she a stunner too?" "No, she's an optometrist."
joke about women joke about men friends silly joke girlfriend high school promise relationships stunner
Rate: Dislike Like
Puns
Why don't some couples go to the gym? Because some relationships don't work out.
Funny Animal Quotes
“It’s just the most amazing thing to love a dog, isn’t it? It makes our relationships with people seem as boring as a bowl of oatmeal.”—John Grogan
“My relationships with my cats have saved me from a deadly, pervasive ignorance.”

- William S. Burroughs.
Divorce Puns
How are relationships similar to algebra?
Because sometimes you look at your X and wonder Y.
Why don't some couples go to the gym?
Because some relationships don't work out.
Dirty Short Jokes
Women fake orgasms to have relationships. Men fake relationships to have orgasms.
Meat Puns
What type of relationships do hotdogs like to have? A frank relationship, they can’t stand lies.
Orange Puns
What are the longest lasting relationships in the fruit world? Orange-d marriages.
Garden Puns
I started dating the girl across the street. Honestly, lawn-distance relationships aren’t that hard.
Ancient Greek Monster Puns
I feel like Medusa was in some rocky relationships.
Want to start your day laughing? Register to our Daily Joke! Want to start your day laughing? Register to our Daily Joke!
Continue With: Facebook Google Use Email
By continuing, you agree to our T&C and Privacy Policy
Contact us | Help | About us | Terms | Privacy policy | Categories | Collections