Foolishness Can Be a Funny Thing ...
Jokes > Tags > Argue Jokes

Engineering Puns
Never argue with Pi, it's irrational.
Funny Marriage Quotes
“A good friend just told me that the key to a successful marriage was to argue naked! I’m gonna do that from now on, when that rarely happens.”
— LeAnn Rimes
Math Puns
Why should you never argue with decimals?
Decimals always have a point.
Puns
When the past, present, and future go camping they always argue. It's intense tense in tents.
Ancient Rome Puns
People argue that the Romans were wrong to crucify Jesus
Personally, I think they nailed it.

Who Gets the Parachute? 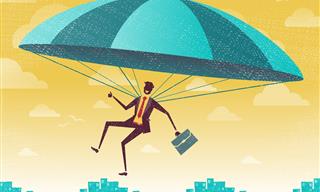 An old man, a schoolboy, a lawyer, a doctor, and a community service worker are all on a plane with only four parachutes when the pilot of the plane has a stroke and passes away. As the plane plummets its passengers to death, the five members of the aircraft argue over who deserve to have the four bags containing the parachutes. Social Worker: "I deserve to live because I protect vulnerable children and support families in need of assistance." The Social Worker grabs the nearest bag and plummets out of the aircraft. Lawyer: "I deserve to live because I advocate for my clients through my sharp wit and massive knowledge." The lawyer grabs the second bag and plummets out of the aircraft. Doctor: "I deserve to live because I help diagnose ill people with my specialized training." The doctor grabs the third bag and plummets out of the aircraft. This leaves only the schoolboy and the old man in the plane with it descending toward the ground. Old man: "Go ahead boy. Take the last parachute. You have many years ahead of you while I am just an old man who doesn't have as many years left." Schoolboy: "Don't worry, we can both take a parachute. Look, there are still two left." The old man’s just stares in shock. "Wha...what... but those three..." "Remember the lawyer with the sharp wit and the massive knowledge? He took my school backpack."
old man boy lawyer joke plane joke doctor parachute years social worker massive knowledge sharp bags argue
Rate: Dislike Like
Tennis Puns
I know my shot was in. But I won’t argue, because I’m not up for the challenge.
Want to start your day laughing? Register to our Daily Joke! Want to start your day laughing? Register to our Daily Joke!
Did you mean:
Continue With: Facebook Google
By continuing, you agree to our T&C and Privacy Policy
Contact us | Help | About us | Terms | Privacy policy | Categories | Archive | Collections