Ketchup Puns
Before I ducked out to the shops, my wife asked me to put ketchup on the shipping list.
Now I can't read it.
Lettuce Puns
A man likes sending random stuff to his friends through the mail because he finds it funny.
This particular time the man takes some lettuce to the post office to ship to a friend from back home.
He tries to package it up but it won't fit unless he cuts it into smaller peices. He cuts it up and stuffs it in a large envelope, however he forgets to write out and attach a shipping label. He doesn't realize his mistake at the time and brings it to the counter to send.

The postal workers says: "You can't send a salad like that, it needs adressing".
Frankenstein Puns
Dr. Frankenstein just placed an order on Amazon.
It wasn't expensive, but I imagine the shipping cost him an arm and a leg.
The Illiterate Job Seeker 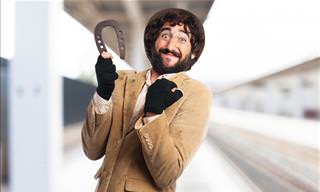 A destitute man is walking the streets looking for a job. Eventually, he comes to a brothel with a "Help Wanted!" sign in the window. He walks in and asks the manager about the job offer in the window. The manager says, "well we need a bookkeeper at this here establishment, so, there are some things you'll need to be able to do." "Like what?" Says the man. "Well, can you read?" "No." "Can you write?" "No." "Can you at least add or subtract?" "Well no I can't do that either," the man says. "But I'm desperate for a job! I haven't a penny to my name and I'm starving!" "Well, alright here's a quarter to buy yourself something to eat." the manager gives him a coin. The destitute man walks out of the brothel and by some chance, a man is walking by with a cart full of apples for sale for 25 cents. The man buys one and just as he's about to take a bite of it, another homeless man says "hey I'll give you 50 cents for that apple!" Thinking about it, the man agrees and gives him the apple. He then goes back to the apple cart and buys two more apples for 25 cents a piece and sells them for 50 cents. This carries on for a while and years later he is the manager of the largest fruit shipping company in the US and he's worth millions of dollars. Eventually, a reporter finds out about this man's past and he decides to write a story about him in the paper. But, before he can write the story the man needs to sign an agreement for the paper to use his story. "Well I can't do that." says the man. "Why not?" Asks the surprised reporter. "I can't read or write... How do you expect me to sign my name?" The reporter is baffled, "you're the owner of the largest shipping company in the US and you can't read or write? Imagine where you'd be if you could!" "Well, I'd probably be a bookkeeper in a brothel."
job business joke sign brothel accountant quarter company illiterate starving shipping destitute bookkeeper
Rate: Dislike Like
Egg Puns
What's a hen's favorite shipping company?
Federal Egg-spress.
Want to start your day laughing? Register to our Daily Joke! Want to start your day laughing? Register to our Daily Joke!
Continue With: Facebook Google Use Email
By continuing, you agree to our T&C and Privacy Policy
Contact us | Help | About us | Terms | Privacy policy | Categories | Collections