What a Priest is Doing in Hell 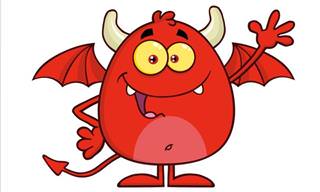 A priest appears at the gate to hell. Surprised, because priests were rare in hell, a demon gets curious and jumps into the priest's path. "How'd you die?" he thunders at him. The priest replied, "I had a heart attack." Demon: "Alright, what happened?" Priest: "Someone broke my windows, popped the tire on my Harley, and stole all my tools out of my shed." Demon: "Well that'd give some a heart attack alright. But you're a priest! Why are you in hell?" Priest: "Well, I was receiving confessionals when a boy walked in and said "Forgive me father, for I have sinned." I asked what he did. He said "I broke someone's windows, popped a tire on his Harley, and stole all his tools." I had a heart attack while I was wringing that little bastard's neck."
religion joke priest bastard hell joke sin heart attack confessional forgive neck demon wringing harley
Rate: Dislike Like
Llama Puns
I tried to phone the spiritual leader of Tibet once, but I was sent a big goat with a long neck instead.
I must have phoned Dial-a-Llama by mistake.
Owl Puns
My wife tried to claim she was a night owl.
She was lying though, because when I tried to turn her head through 270 degrees, her neck snapped.
My pet owl will soon turn 180.
He's not old, he just has a bad neck.
Turtle Puns
What do you get if you cross a turtle with a giraffe and a kangaroo?
A turtle neck jumper.
Giraffe Puns
Why is a giraffe’s neck so long?
Because its head is so far from its body.
What do you call it when a giraffe swallows a toy jet?
A plane in the neck.
Have you heard the joke about the giraffe’s neck?
Let me warn you, it’s a long one.
Today I learned that a giraffe’s neck is so strong a human can climb up it.
Also, I got banned from my local zoo.
I had a bet on a giraffe race yesterday but my selection lost.
It was nowhere near winning – it lost by a neck.
What happened when the two giraffes had a race?
It was neck and neck.
Why wasn’t the giraffe invited to the party?
He was a pain in the neck.
Koala Puns
If you ever own a koala as a pet, make sure you can keep track of it by putting a koalar around its neck.
Bat Puns
Why did the bat break up with her girlfriend?
She thought she was a pain in the neck.
Blonde Jokes
What does a blonde and a beer bottle have in common? They're both empty from the neck up.
Jokes For Women
How can you tell when a man is well hung? When you can just barely slip your finger in between his neck and the noose.
Contact us | Help | About us | Terms | Privacy policy | Categories | Collections