The Fortune Teller and the Bad News 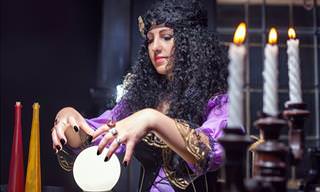 During a recent outing in New Orleans, a woman sneaked off to visit a fortune teller of some local repute. In a dark and hazy room, peering into a crystal ball, the mystic delivered grave news. "There's no easy way to say this, so I'll just be blunt: Prepare yourself to be a widow. Your husband will die a violent and horrible death this year." Visibly shaken, the woman stared at the fortune teller's lined face, then at the single flickering candle, then down at her hands. She took a few deep breaths to compose herself. She simply had to know. She met the fortune teller's gaze, steadied her voice, and asked, "Will I be acquitted?"
marriage joke fortune teller murder
Rate: Dislike Like 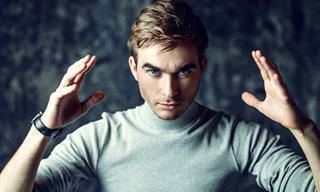 The police detectives were having trouble determining whether or not their suspects were guilty. They just couldn't get them to confess. After hearing word of a telepath who is able to determine if any person brought before him committed a crime, they decide to consult him. They bring the first suspect in, and instantly the man says, “This person has committed murder. He murdered a pizza man delivering to his house.” Speechless, the police start to think this man is the real deal. “He has to be telling the truth,” they say to each other. “We haven’t told him anything about the case.” They bring another suspect in, and instantly the man says, “this man is innocent, and has committed no crimes. He was framed of burglary by his next door neighbor, Bill Summers.” The cops are dumbfounded. “How does he know? We haven’t told him anything about the case!” The cops are a bit skeptical, and decide to make a little test. They bring in a beautiful woman they know to have not committed a felony. An officer enters the room with her, and instantly the man says, “This woman has committed theft.” The officer, knowing this is a lie, tell the man, “We knew it! We brought her in to truly test your abilities, and clearly you're a fraud!” They dismiss the woman. “I would catch up to her if I were you,” says the man. “And why is that?” Asks the officer. “Because she stole your wallet.”
murder police joke comeback joke officer pizza wallet beautiful dumbfounded telepath burglary felony
Rate: Dislike Like
Funny Marriage Quotes
“My husband and I have never considered divorce… murder sometimes, but never divorce.”—Dr. Joyce Brothers 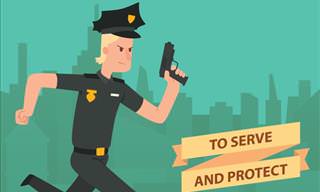 The local sheriff was looking for a deputy, so Chad - the new blond recruit, wants the job. "Okay," the sheriff drawled, "Chad, what is 1 and 1?" "11" he replied. The sheriff thought to himself, "That's not what I meant, but he's right." "What two days of the week start with the letter 'T'?" "Today and tomorrow." He was again surprised that Chad supplied a correct answer that he had never thought of himself. perhaps he has a creative mind. "Now Chad, listen carefully: Who killed Abraham Lincoln?" Chad looked a little surprised himself, then thought really hard for a minute and finally admitted, "I don't know." "Well, why don't you go home and work on that one for a while?" So, Chad wandered over to the pool hall where his pals were waiting to hear the results of the interview. "Hey Chad! How was it?" "It went great! First day on the job and I'm already working on a murder case!"
job blond joke murder police joke sheriff stupidity joke abraham lincoln deputy pool hall recruit
Rate: Dislike Like
Funny Poems
There’s been a murder, a woman was killed,
found in a bathtub, partially filled.
A pair of policemen went into the house
and questioned the poor woman’s spouse.
He’d just come home from working all night
and found her like that, a terrible sight.
The younger policeman looked on with dismay.
He’d never forget that terrible day.
He saw the young woman from behind the door
and empty milk cartons all over the floor,
Scattered strawberries, slices of fruit,
and spoonfuls of sugar and honey to boot.
”Who could have done this terrible thing?”
His voice had a horrified, pitiful ring.
”Just look at the clues,” replied Sargeant Miller.
”It looks like the work of a cereal killer.” (Albert Van Hoogmoed)

The FBI and is Serious Business 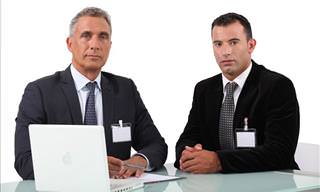 The FBI had an open position for an assassin. After all the background checks, interviews and testing were completed, they had narrowed the field down to 3 possible agents. They brought them in and starting running exams on their skills. They passed all with flying colors. For the final test, the FBI agents took one of the men to a large metal door and handed him a gun. 'We must know that you will follow your instructions no matter what the circumstances.' Inside the room you will find your wife sitting in a chair... we need you to kill her.' The man said, 'You can't be serious. I could never shoot my wife.' The agent said, 'Then you're not the right man for this job. Take your wife and go home.' The second man was given the same instructions. He took the gun and went into the room. All was quiet for about 5 minutes. The man came out with tears in his eyes, 'I tried, but I can't kill my wife.' The agent said, 'You don't have what it takes. Take your wife home.' Finally, the last one, a woman, was given the same instructions, to kill her husband. He took the gun and went into the room. Shots were heard, one after another. They heard screaming, crashing, banging on the walls. After a few minutes, all was quiet. The door opened slowly and there stood the man, wiping the sweat from his brow. 'Some joker loaded the gun with blanks,' he panted. 'I had to do it the hard way.'
joke about men husband wife marriage joke fbi murder
Rate: Dislike Like
Crow Puns
What do you call a group of crows flying over a couple?
A murder over love.
I would rather breed mice than crows
Mischief is one thing, but I don't think I can pull off a murder.
What do you call a group of crows eating a box of corn flakes?
A cereal murder.
A guy walks into a crow bar
It's a murder scene
I had to carry a group of crows once.
It was murder on my back!
What do you call a group of crows who see food?
A tempted murder.
Experts suggest that the crows flying beak first into windows at a horrifying speed comit a murder suicide.
And the collective nouns go: a murder of crows, a herd of cows, a migraine of children.
I can’t believe that during the attempted murder, John Crow, Russel Crow and Sheryl Crow were all in the room.
A bear covered in a bunch of crows gives the picture of a grizzly murder.
The flock of crows that were sprayed with sewage was a true definition of murder most foul.
I thought of premeditated murder and a flash mob of crows came to my mind.
Tableware Puns
Why did i murder the woman who served me a glass of wine?
Because i wanted tequila.
Want to start your day laughing? Register to our Daily Joke! Want to start your day laughing? Register to our Daily Joke!
Did you mean:
Continue With: Facebook Google
By continuing, you agree to our T&C and Privacy Policy
Contact us | Help | About us | Terms | Privacy policy | Categories | Archive | Collections
Login
Already registered?
Enter your email address and get full access.
Did you mean:
Not a member? Click Here
Personal Details