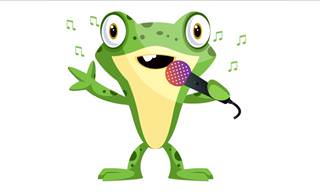 A man walked into a bar. He sat down and asked the bartender "If I impress you, can I have a free drink?" The bartender said sure, so the man reached in his pocket and pulled out a tiny piano. He then pulled out a small rat and set it by the piano. It crawled on to the bench and began playing music. The bartender was amazed, so he gave the man a beer. Next, the man said, "If I impress you even more, can I have free drinks for life?" The bartender didn't think it was possible, so he agreed. The man pulled a frog out of his pocket, and it began to sing by the piano.  The bartender smiled and told the man that he was impressed. A man in a suit with a cane walked into the bar, saw the small animals, and offered to buy them for $2 million. The owner said no, but he offered to sell the frog for $500k. The rich man agreed, took the frog, and left. The bartender couldn't believe the owner just did that and said "Why did you just sell the frog?! There is no singer now!" The owner laughed and said, "Don't worry, the rat is a ventriloquist."
animal joke frog music bar joke rat piano animal
Rate: Dislike Like
Corona Virus Jokes
Definition of Irony - When the Year Of The Rat starts with a plague.
Biology Puns
Working on lab science animals is a real rat race.
Funny Animal Poems That Rhyme
Starts off in the morning, wakes up at six,
Grooms itself using its tongue and licks.
I give it breakfast with a friendly pat.
That's the daily morning of my cat.

Returns for lunch at one o' clock.
Eats milk rice and then goes for a walk.
Sometimes even hunts and catches a rat.
That's the daily afternoon of my cat.

Naps after lunch outside my door.
Sleeps so deeply, perhaps even snores.
Doesn't like the ground; it prefers a mat.
That's the daily evening of my cat.

Wakes up refreshed and comes for dinner.
Does it eat too much? Shouldn't it be thinner?
Eats and sleeps - hope it doesn't get fat.
That's the daily night of my cat.

(M. Tarun Prasad)
I have a cat
A real fat cat
My cat is all black
My black fat cat
It is a cat with a knack
A true fact about my cat
My fat black cat
She has a knack to catch a rat
My all black cat brought me the rat
This is why my cat is a fat black cat
So rats watch your back
From my cat with the knack
Or you will become a snack for my fat black cat