A Mime At the Zoo

One day an out of work mime is visiting the zoo and attempts to earn some money as a street performer. However, as soon as he starts to draw a crowd, the zookeeper grabs him and forcefully drags him into his office. The zookeeper then explains to the mime that the zoo's most popular attraction, a gorilla, has died suddenly. The keeper fears that attendance at the zoo will fall off. He offers the mime a job to dress up as the gorilla until they can get another one. The mime accepts. The next morning, before visitors arrive at the zoo, the mime puts on the gorilla suit and enters the cage. He discovers that it's a great job. He can sleep all he wants, play and make fun of people and he draws bigger crowds than he ever did as a mime. However, eventually the crowds tire of him and he gets bored just swinging on tires. He begins to notice that the people are paying more attention to the lion in the cage next to his. Not about to lose the attention of the adoring crowd, he climbs to the top of his cage, crawls across a partition, and dangles from the top to the lion's cage. Of course, this makes the lion furious, but the crowd loves it. At the end of the day the zookeeper comes and gives the mime a raise for being such a good attraction as a gorilla. Well, this goes on for some time. The mime keeps taunting the lion, the crowds grow larger, and his salary keeps going up. Then one terrible day when he is dangling over the furious lion, he slips and falls. The mime is terrified. The lion gathers itself and prepares to pounce. The mime is so scared that he begins to run round and round the cage with the lion close behind. Finally, the mime starts screaming and yelling, "HELP! HELP ME!", but the lion is quick and pounces. The mime soon finds himself flat on his back looking up at the angry lion when he suddenly hears the lion whisper: "Shut up you idiot! You wanna get us both fired?"
animal joke gorilla business joke employee lion animal
Rate: Dislike Like
Puns
It's foolish for humans to try and take back the planet of the apes
Since they are incredibly good at gorilla warfare.
One Liners and Short Jokes
What do you give three-hundred-pound gorilla for his birthday?
I don't know, but you better hope he likes it.
Monkey Puns
If you were in the jungle and a gorilla charged you, what should you do?
Pay him.
Where does a 2,000 pound gorilla sit?
Anywhere it wants to.
Why is it a bad idea to get in a fight with a monkey?
Because they use gorilla warfare.
The Married Couple and the Gorilla 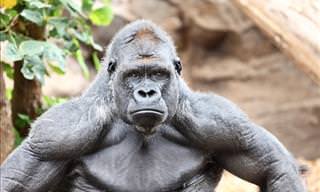 A man and his wife were spending the day at the zoo. She was wearing a loose fitting, pink dress, sleeveless with straps. He was wearing his usual jeans and T-shirt. As they walked through the ape exhibit, they passed in front of a large, silverback gorilla. Noticing the wife, the gorilla went crazy. He jumped on the bars, and holding on with one hand and two feet he grunted and pounded his chest with his free hand. He was obviously excited at the pretty lady in the pink dress. The husband, noticing the excitement, thought this was funny. He suggested: "Now maybe pucker your lips and wiggle your bottom, see what that does." She played along and the gorilla got even more excited, making noises that would wake the dead The husband then suggested she let one of her straps fall to show a little more skin. She did... and the gorilla was about to tear the bars down. "Now..... show your thighs and sort of fan your dress at him," he said. This drove the gorilla absolutely crazy and he started doing flips. The husband smiled sweetly at his wife as he opened the cage door. "Now Tell him you have a headache."
animal joke relationship joke gorilla joke about women animal
Rate: Dislike Like
The KGB and the Rabbit 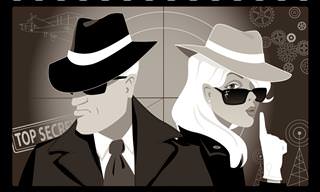 Years ago, the CIA, the Mossad and the KGB were tasked to find a rabbit in a dense forest as a friendly competition between agencies. The CIA, returns with a rabbit in 24 hours, explaining that they'd used an array of satellites pinpointing the location of the rabbit in record time. The Mossad returns with a rabbit in 48 hours, stating that they'd used a network of informants and ground operatives to locate the rabbit with a fraction of the cost. The KGB agents return after 5 days with a giant bear. Surprised and bemused, the other parties laugh and say to the KGB that they were supposed to bring back a rabbit! The KGB agents replied: "This is a rabbit, ask it for yourself if you don't believe us." As they all turn towards the bear. The bear glances at the KGB agents fearfully and says: "I'm a rabbit."
gorilla political joke rabbit cia parents kgb always believe network mossad satellites informant bruised
Rate: Dislike Like
Contact us | Help | About us | Terms | Privacy policy | Categories | Collections