Quotes
“The surest sign that intelligent life exists elsewhere in the universe is that it has never tried to contact us.”
Bill Watterson
The New Element of 'Administratium' 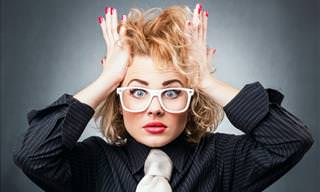 Investigators at a major research institute have discovered the heaviest element known to science. This startling new discovery has been tentatively named Administratium The new element has no protons or electrons, thus having an atomic number of 0. It does, however, have 1 neutron, 125 assistant neutrons, 75 vice neutrons, and 111 assistant vice neutrons, for an atomic mass of 312. These 312 particles are held together by a force called morons, which are surrounded by vast quantities of lepton-like particles called peons. Since it has no electrons, Administratium is inert. However, it can be detected as it impedes every reaction with which it came into contact. According to the discoverers, a minute amount of Administratium causes one reaction to take over four days to complete when it would normally take less than a second. Administratium has a normal half-life of approximately three years; it does not decay, but instead undergoes a reorganization in which a portion of the assistant neutrons, viceneutrons, and assistant vice neutrons exchange places. In fact, an Administratium sample's mass will actually increase over time, since with each reorganization some of the morons inevitably become neutrons, forming new isotopes. This characteristic of moron promotion leads some scientists to speculate that Administratium is formed whenever morons reach a certain concentration. This hypothetical quantity is referred to as the "Critical Morass".
element assistant contact discovery force vast heaviest protons electrons morons lepton inert neurtrons
Rate: Dislike Like
Baseball Puns
How do baseball players stay in contact with each other?
They touch base every once in a while.
Puns
I accidentally went to bed with my contact lenses in the other night.
My dreams have never been clearer.
One Liners and Short Jokes
Apparently you can get the Corona virus if your eye touches someone else's eye.
I guess it's a good thing I refuse to make eye contact.
Football Puns
You shouldn't wear glasses when playing football...
They say it's a contact sport.
Contact us | Help | About us | Terms | Privacy policy | Categories | Collections