The Hilarious Lines of Tommy Cooper 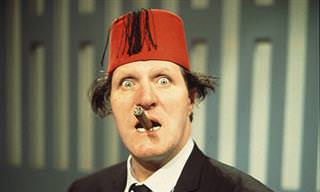 When I was a kid, I went to a psychiatrist for one of those aptitude tests. On the desk, he put a pitchfork, a wrench, and a hammer and he said to the nurse: ‘If he grabs the pitchfork, he’ll become a farmer. If he grabs the wrench, he’ll be a mechanic, and if he takes the hammer, he’ll be a carpenter.’ I grabbed the nurse... The town was so dull, one day the tide went out and it never came back. Every day she takes the car out, she comes back with the same question: ‘Guess who I ran into.’ A piano-tuner was called to a nightclub to tune the piano. He was at it for five hours, but the bill only came to £3. The manager said: ‘Is that all? How come you worked for five hours to tune the piano and you only charge £3?’ He said: ‘What?’ A dog bit a chunk out of my leg the other day. A friend of mine said: ‘Did you put anything on it?’ I said: ‘No, he liked it as it was.’ My wife is really into Do-It-Yourself. Every time I ask her to fix something, she says: ‘Oh, do it yourself!’ My wife does her own decorating, but she overdoes it. The other day I opened the fridge and there was a lampshade on the lightbulb. I swam the English Channel once. ‘But a lot of people have swum the Channel.’ Lengthwise? She’s always smiling. She’s the only girl I know whose teeth are sunburnt. A leopard went to see a psychiatrist. He said: ‘Every time I look at my wife, I see spots before my eyes.’ The psychiatrist said: ‘That’s only natural.’ The leopard said: ‘But, doctor, she’s a zebra.’ A drunk was brought into a police station. He pounded his fist on the counter and said: ‘I want to know why I’ve been arrested.’ The sergeant said: ‘You have been brought in for drinking.’ He said: ‘Oh, that’s all right, then. Let’s get started!’ I always sit in the back of a plane. It’s much safer. You never hear of a plane backing into a mountain!
husband wife fridge nurse friend dad joke hammer one liners tommy cooper pitchfork wrench
Rate: Dislike Like
Want to start your day laughing? Register to our Daily Joke! Want to start your day laughing? Register to our Daily Joke!
Did you mean:
Continue With: Facebook Google
By continuing, you agree to our T&C and Privacy Policy
Contact us | Help | About us | Terms | Privacy policy | Categories | Archive | Collections
Login
Already registered?
Enter your email address and get full access.
Did you mean:
Not a member? Click Here
Personal Details