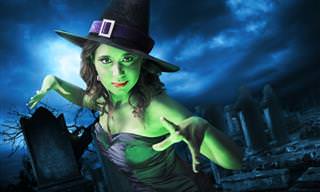 There were once four powerful witch covens: the witches of the mountains, the deserts, the forests, and the seas. For a thousand years they made war with one another, casting curses and hexes and bringing all manner of malady to the land in their hatred for one another. One day, they decided the only solution was to convene for a meeting of all the covens, in which they would either strike a deal for peace, or end it all in violent bloodshed. The sea witches arrived first, carried upon a tidal wave that bore them up and onto the coast, the waters crashing loudly as they struck the shoreline as if to announce their presence. The mountain witches rode down the hillside upon magical stormclouds, thunder and lightning bursting from their steeds of vapor, a tumultuous blizzard ravaging the mountains in their wake. The forest witches, shape-shifters, emerged in the form of gnarled roots which encircled the meeting place and rose out of the ground, bending and twisting into humanoid silhouettes from which sprung skin and clothing, as a flurry of leaves swirled around furiously. The sand witches arrived in a catering truck.
desert truck dad joke solution forest violent mountain sea sand blizzard thousand witches vapor bloodshed
Rate: Dislike Like
Want to start your day laughing? Register to our Daily Joke! Want to start your day laughing? Register to our Daily Joke!
Did you mean:
Continue With: Facebook Google
By continuing, you agree to our T&C and Privacy Policy
Contact us | Help | About us | Terms | Privacy policy | Categories | Collections