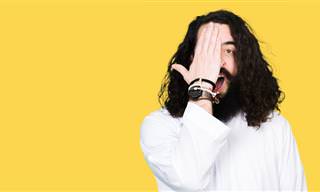 Benson runs a nail factory and decides his business needs a bit of advertising. He has a chat with a friend who works in marketing and he offers to make a TV ad for Benson's Nails. "Give me a week," says the friend, "and I'll be back with an ad." A week goes by and the marketing executive comes to see Benson. He opens his laptop and presses play. A Roman soldier is busy nailing Jesus to the cross. He turns to face the camera and says with a grin "Use Benson's Nails, they'll hold anything." Benson goes mad shouting: "What is the matter with you? They'll never show that on TV. Give it another try, but no more Romans crucifying Jesus!" Another week goes by and the marketing man comes back to see Benson with another ad. He turns his laptop around and hits play. This time the camera pans out from a Roman standing with his arms folded to show Jesus on the cross. The Roman looks up at him and says 'Benson's Nails, they'll hold anything'. Benson is beside himself. "You don't understand: I don't want anything with Jesus on the cross! Now listen, I'll give you one last chance. Come back in a week with an advertisement that I can broadcast." A week passes and Benson waits impatiently. The marketing executive arrives and puts on the new video. A naked man with long hair, gasping for breath, is running across a field. About a dozen Roman soldiers come over the hill, hot on his trail. One of them stops, turns to camera and says 'If only we had used Benson's Nails!'.
business joke religion joke marketing jesus television camera nail roman cross commercial ad broadcast
Rate: Dislike Like
Want to start your day laughing? Register to our Daily Joke! Want to start your day laughing? Register to our Daily Joke!
Did you mean:
Continue With: Facebook Google
By continuing, you agree to our T&C and Privacy Policy
Contact us | Help | About us | Terms | Privacy policy | Categories | Collections