Putin and the Journalist 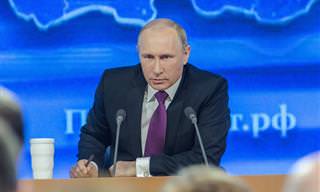 With the Russian Elections coming up, a reporter asks Russian President Vladimir Putin a question at a press conference. "With Hillary Clinton almost becoming president, and Kamala Harris being elected the Vice President in the United States, do you think that a Russian woman could ever rise up to the highest office of our great nation and become president?" President Putin responds immediately with a resounding "NO." without any hesitation, shocking all the reporters. "Why do you think that Mr. Putin?" the reporter asks, surprised and confused at the blunt dismissal. Vladimir calmly looks at the reporter and says "Because I am not a woman."
political joke United States woman president russia putin hillary clinton kamala harris vice president
Rate: Dislike Like
Contact us | Help | About us | Terms | Privacy policy | Categories | Collections