Zombie Puns
How are zombies like computers?
They use mega-bites!
Tiger Puns
Q: What do tigers and computers have in common?
A: They both have mega bites.
Hard Drive Puns
Computers can be very good at golf because of their hard drives. 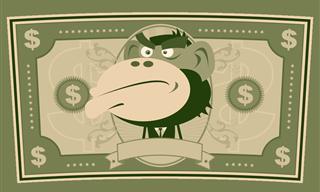 A man goes inside a pet shop and starts to move around the cages to look at the pets. He sees a monkey with a price tag of $5,000. This makes him curious, as most other monkeys are $500 at most. He then goes to the merchant to ask for details. "Hey mister, the monkey…what does it know to worth that much money?" "That's our computer monkey. It knows Windows 7 and windows 10, and also knows Word, C++, .net, app programming, and last but not least, it knows how to fix computers if yours breaks." "Wow!" Declared his customer. "That's a good monkey, well worth the money." He goes and finds another monkey with a price of $10,000 and again he will ask the merchant. "What does this monkey know?" "That's a highly specialized monkey. It knows 5 languages and can translate fluently between them." "That's amazing!" Says the man excitedly. "That's WELL worth the money!" "Yea, but if you buy one you have to buy all three. They work together." The man follows the seller's pointing finger to yet a third monkey, just sitting there with a price tag of $20,000. "Gosh, what does THIS monkey to justify that ridiculous amount of money?" "To be honest, I've never seen him doing anything, but the other two call him Project Manager."
animal joke monkey business joke money manager programming computers pet shop merchant
Rate: Dislike Like
Computer Puns
Q. Where do computers keep their money?
A. In a data bank.
Q. Why can't computers play tennis?
A. They try to surf the net.
Interesting that illegally copying on computers is known as piracy.
I suppose you CTRL C
Why do cats like computers the best?
Cuz they have a mouse.
Where do computers go to dance?
The disk-O.
What do computers do on a beach vacation?
Surf the net.
Why do computers make such bad boxers?
Their bark is worse than their byte.
People need to be careful about computers at all times because they byte.
How do lumberjacks shut down their computers?.
They log off.
Why do computers wear glasses?
To improve their web-sight.
Why can't elephants use computers?
Because they're scared of the mouse.
Dancing Queen used to have a lot of profanity in its lyrics, but after computers became common
No-one needed an ABBA cuss
Want to start your day laughing? Register to our Daily Joke! Want to start your day laughing? Register to our Daily Joke!
Did you mean:
Continue With: Facebook Google
By continuing, you agree to our T&C and Privacy Policy
Contact us | Help | About us | Terms | Privacy policy | Categories | Archive | Collections
Login
Already registered?
Enter your email address and get full access.
Did you mean:
Not a member? Click Here
Personal Details