Anti Pick Up Lines
You must sprinkle extra sugar in your cereal in the morning...
Why, because I'm so sweet?
No, because you're really fat.
One Liners for Kids
What do you call a person that chops up cereal. a cereal killer.

I Know Exactly Where to Put You 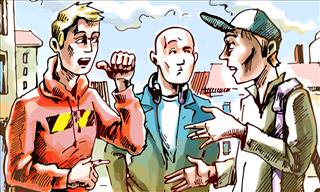 One day, three unemployed factory workers heard that a large food company was enlarging and needed more staff. So they went downtown to see if they could get themselves a job. After filling out their applications, each one was interviewed and each one managed to get hired. As they were waiting to be assigned their new duties, a foreman came by and spoke to the hiring boss. The foreman told the boss that he didn't think it was such a good idea as one of the workers had snapped for no apparent reason at his last job. Also, a second was said to have had cracked up after severe mental stress. The third, he believed was their father who he felt was a bit odd but he couldn't put his finger on it. The hiring boss reassured the foreman and said that they would start on something easy and after a week, the company would re-assess them to see if they would be kept on. The foreman reluctantly agreed and asked the boss where he thought they should start. The boss replied, "Why not take them and put them in our Cereal Division - Snap, Crackle, and Pop should work out fine down there."
silly joke office boss cereal
Rate: Dislike Like
Fish Puns
How to fish like to eat cereal?
In a fish bowl!
Bear Puns
What is a polar bear’s favorite cereal?
Ice Crispies.
One Liners and Short Jokes
I once asked my grandfather how he'd lived so long
He smiled and said; "I sprinkle a little gunpowder on my cereal every morning."