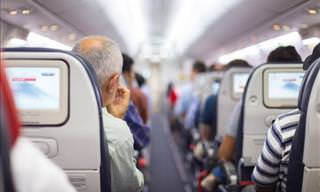 An arrogant professor boards a plane and gets a seat beside an old man. Mid-flight, the professor decides to play a game with the old man and prove he’s intellectually superior, so he turns to him and says: “Hey, do you want to play a little game with me?” The old man looks at him and says: “Depends. What type of game?” The professor goes on to explain the game: “Taking turns, we’ll ask each other one question at a time. If the other knows the answer, the asker gives him one dollar, and if he doesn’t, he gives one dollar to the asker. Want to play?” The professor grins, knowing his general knowledge is vastly superior. To his dismay, the old man refuses! Determined to make him agree, the professor raises the stakes for him. “If I lose, I ‘ll give you two dollars instead of one!” “No.” “Five dollars!” “No.” “Ten dollars!” “I told you, no.” Desperate, the professor makes one final offer: “If I lose, I’ll give you a hundred dollars, and if you lose you’ll only give me one!” The professor pleads. The old man ponders this, then sighs. “Only if I get to start”, and the professor immediately agrees. “Ask away”, the professor says, confident he’ll never lose. The old man asks: “What has five heads, forty feet, and lives inside of a bucket?” The professor turns the riddle over in his head, trying to find anything that fits the description. After an hour of intense concentration, the professor gives up. Grumbling, he pulls out his wallet and gives the old man $100. He wastes no time and asks him: “So what has five heads, forty feet, and lives inside of a bucket?” The old man smiles and says: “I’ve got no idea. Here’s your dollar."
plane joke professor comeback joke smart blond dollars asker raises stakes desperate concentration grumbling
Rate: Dislike Like
Puns
A Tibetan monk sees the face of Jesus in a tub of margarine.
He immediately raises his eyes to the heavens and exclaims "I can't believe it's not Buddha!"
Funny Limericks
Once I did hear my brother call
The sun a giant fire ball.
How can that be?
For what I see,
Is something up high so small.

I see it at the break of dawn,
When it announces the day is on.
Its brilliant gold,
A joy to behold,
And being outside is so much fun.

John might be right, for I must say,
The sun is not so cool at midday.
Its shining light
Is just so bright,
I have to pull my eyes away.

Evening comes and it's so strange
How the sun still appears to change.
No longer small,
A bigger ball.
Its tone, now a lovely bright orange!

This curious ball hanging up high,
For me, raises many questions why.
But when it shines,
Then life is fine.
Thank God the sun is in the sky.