Little Johnny and the New Baby 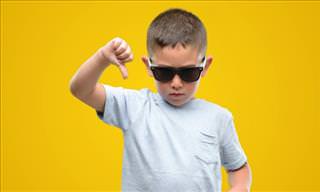 A country doctor went way out to the boondocks to deliver a baby.  It was so far out, there was no electricity. When the doctor arrived, no one was home except for the laboring mother and her 5-year-old child. The doctor instructed the child to hold a lantern high so he could see, while he helped the woman deliver the baby. The child did so, the mother pushed and after a little while, the doctor lifted the newborn baby by the feet and spanked him on the bottom to get him to take his first breath.  The doctor then asked the 5-year-old what he thought of the baby.  "Hit him again," the 5-year-old said. "He shouldn't have crawled up there in the first place!"
doctor little johnny joke baby little johnny electricity except crawled boondocks laboring country doctor
Rate: Dislike Like
Want to start your day laughing? Register to our Daily Joke! Want to start your day laughing? Register to our Daily Joke!
Did you mean:
Continue With: Facebook Google
By continuing, you agree to our T&C and Privacy Policy
Contact us | Help | About us | Terms | Privacy policy | Categories | Collections