Why Go to the Bar at All? 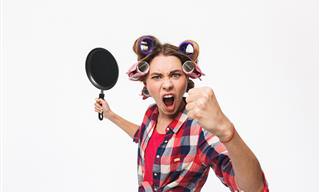 This is a story about a newlywed couple who had only been married for two weeks. The husband, although very much in love, couldn't wait to go out on the town and party with his old buddies . So, he said to his new wife, "Honey, I'll be right back." "Where are you going, coochy cooh?" asked the wife. "I'm going to the bar, pretty face. I'm going to have a beer." The wife said, "You want a beer, my love?" She opened the door to the refrigerator and showed him 25 different kinds of beer brands from 12 different countries: Germany , Holland , Japan , India - they had it all. The husband didn't know what to do, and the only thing that he could think of saying was, "Yes, lolly pop...but at the bar...you know...they have frozen glasses..." He didn't get to finish the sentence, because the wife interrupted him by saying, "You want a frozen glass, puppy face?" She took a huge beer mug out of the freezer, so frozen that she was getting chills just holding it. The husband, looking a bit pale, said, "Yes, tootsie roll, but at the Bar they have those hors d'oeuvres that are really delicious... I won't be long, I promise. OK?" You want hors d'oeuvres, poochi pooh?" She opened the oven and took out five dishes of different hors d'oeuvres: chicken wings, pigs in blankets, mushroom caps, pork strips, etc. The husband tries once again. "But my sweet honey... At the bar... You know...there's swearing, dirty words and all that..." "You want dirty words, sweetie pie? Smiled the wife. "Then drink your bloody beer in your darn frozen mug and eat your stupid snacks, because you are married now, and you aren't going anywhere! Got it, moron?"
marriage joke bar joke snacks swearing puppy frozen hors d'oeuvres poochi pooh coochy cooh dirty words
Rate: Dislike Like
Want to start your day laughing? Register to our Daily Joke! Want to start your day laughing? Register to our Daily Joke!
Did you mean:
Continue With: Facebook Google
By continuing, you agree to our T&C and Privacy Policy
Contact us | Help | About us | Terms | Privacy policy | Categories | Archive | Collections
Login
Already registered?
Enter your email address and get full access.
Did you mean:
Not a member? Click Here
Personal Details