If I Had a Dollar For Each Of These Jokes...
Jokes > Tags > Donkey Jokes

The King, the Weather and the Donkey 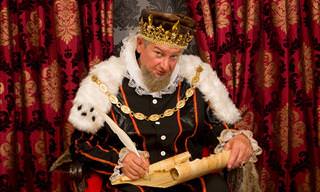 Once upon a time, there was a king who wanted to go fishing. He called the royal weather forecaster and inquired about the weather forecast for the next few hours. The weatherman assured him that there was no chance of rain in the coming days. So the king went fishing with his wife, the queen. On the way he met a farmer on his donkey. Upon seeing the king the farmer said, "Your Majesty, you should return to the palace at once because in just a short time I expect a huge amount of rain to fall in this area". The king was polite and considerate, he replied: "I hold the palace meteorologist in high regard. He is an extensively educated and experienced professional, and I pay him very high wages. He gave me a very different forecast. I trust him and I will continue on my way." So they did. However, a short time later a torrential rain fell from the sky. The King and Queen were totally soaked and their entourage chuckled upon seeing them in such a shameful condition. Furious, the king returned to the palace and gave the order to fire the weatherman at once! Then he summoned the farmer and offered him the prestigious and high paying role of royal forecaster. The farmer said, "Your Majesty, I do not know anything about forecasting. I obtain my information from my donkey. If I see my donkey's ears drooping, it means with certainty that it will rain." So instead, the King hired the donkey on the spot. And thus began the ancient-old practice of hiring asses to work in the government and occupy its highest and most influential positions.
political joke government king joke weather donkey
Rate: Dislike Like

The Boy, the Donkey and the Old Man 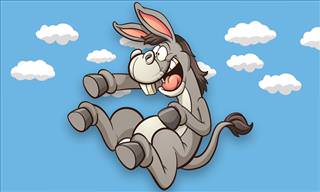 An old man, a boy and a donkey were going to town. The boy rode on the donkey and the old man walked. As they went along they passed some people who remarked it was a shame the old man was walking and the boy was riding. The man and boy thought maybe the critics were right, so they changed positions. Later, they passed some people that remarked, "What a shame, he makes that little boy walk." They then decided they both would walk! Soon they passed some more people who thought they were stupid to walk when they had a decent donkey to ride. So they both rode the donkey. Now they passed some people that shamed them by saying how awful to put such a load on a poor donkey. The boy and man said they were probably right, so they decided to carry the donkey. As they crossed the bridge, they lost their grip on the animal and it fell into the river and drowned. The moral of the story? If you try to please everyone, you might as well kiss your ass good-bye.
old man boy silly joke donkey bridge moral river drown ride shame walk awful
Rate: Dislike Like
Roses are Red Violets are Blue Jokes
Roses are red,
Violets are blue,
You look like a donkey,
And smell like one too.
Dirty Short Jokes
What do you get when cross a donkey and an onion? a piece of as* that'll bring a tear to your eye.
If you had a donkey and I had a chicken and if your donkey ate my chicken what will you have? Three feet of my co*k up your a*s.
Dirty Puns
What do Bruce Lee and the Donkey from Shrek have in common?
They have both entered the dragon.
Want to start your day laughing? Register to our Daily Joke! Want to start your day laughing? Register to our Daily Joke!
Did you mean:
Continue With: Facebook Google
By continuing, you agree to our T&C and Privacy Policy
Contact us | Help | About us | Terms | Privacy policy | Categories | Archive | Collections