150 Puns From All Walks of Life
Jokes > Tags > Cupped Jokes

The Invention of Yodeling 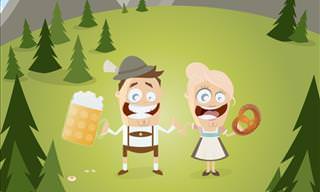 Many years ago a man was travelling through the mountains of Switzerland. Nightfall was rapidly approaching and he had nowhere to sleep. He went up to a farmhouse and asked the farmer if he could spend the night. The farmer told him that he could sleep in the barn. As the story goes, the farmer's daughter asked her father, "Who is that man going into the barn?" "That fellow is travelling through," said the farmer. "Needs a place to stay for the night, so, I told him he could sleep in the barn." The daughter said, "Perhaps he is hungry." So she prepared him a plate of food for him and then took it out to the barn. About an hour later, the daughter returned. Her clothing dishevelled and straw in her hair. Straight up to bed she went. The farmer's wife was very observant. She then suggested that perhaps the man was thirsty. So she fetched a bottle of wine, took it out to the barn, and she too did not return for an hour. Her clothing was askew, her blouse buttoned incorrectly. She also headed straight to bed. The next morning at sunrise the man in the barn got up and continued on his journey, waving to the farmer as he left. When the daughter awoke and learned that the visitor was gone, she broke into tears. "How could he leave without even saying goodbye," she cried. "We made such passionate love last night!" "What?" shouted the father as he angrily ran out of the house looking for the man, who by now was halfway up the mountain. The farmer screamed up at him, "I'm going to get you! slept with my daughter!" The man looked back down from the mountainside, cupped his hand next to his mouth, and yelled out... "LAIDTHEOLADEETOO!"
sleep love wife daughter farmer joke hungry mountains switzerland passionate mountainside cupped nightfall
Rate: Dislike Like
Want to start your day laughing? Register to our Daily Joke! Want to start your day laughing? Register to our Daily Joke!
Did you mean:
Continue With: Facebook Google
By continuing, you agree to our T&C and Privacy Policy
Contact us | Help | About us | Terms | Privacy policy | Categories | Archive | Collections
Login
Already registered?
Enter your email address and get full access.
Did you mean:
Not a member? Click Here
Personal Details