Puns
Let me tell you about my grandfather. He was a good man, a brave man. He had the heart of a lion, and a lifetime ban from the zoo.
Who is the Bravest Soldier? 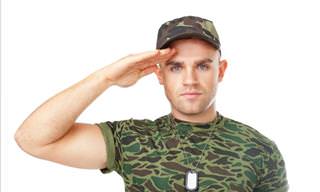 During WW2, three generals were arguing who had the bravest soldiers. The British general called one of his men over. “Private! See that Nazi tank in the minefield there? Go destroy it.” “Yes, Sir!” The soldier replied and started running. He ran across the unmarked minefield until within range of the tank with his anti-tank weapon, took aim and fired, destroying the tank all the while under heavy fire from the enemy trenches. “See, British soldiers are the bravest.” “That’s nothing” said the Russian General “Comrade! See that enemy soldier manning that machine gun there? Run across the mines into the trenches and kill him with a knife.” “Da, Comrade General!” The Russian soldier bravely charges across the minefield under heavy fire, jumped into the trenches fought his way through many enemy soldier then being shot many times from the machine gun nest before reaching that soldier and slicing his throat after a bloody brawl. He makes it out and crumples to the floor, dead from his many wounds. “Nobody more brave than Russian soldier.” Laughs the Russian general. The American general, unimpressed said “Let me show you all what real courage is.” He calls one of his men over. “Private! See that enemy command post over there? I want you to run naked across the minefields, fight your way through the trenches, go to the command post and kill the commanding officer bare handed!” Without hesitation, the American soldier salutes and says “No disrespect, General, but you've lost your darn mind if you think I'll do that, sir!" “See?" Smiles the general, "Now THAT takes some guts!”
American Military joke soldier British Russian generals brave
Rate: Dislike Like
Tiger Puns
There is nothing impaws-sible if you’re as brave as a tiger!
Chuck Norris Jokes
The reason the Holy Grail has never been recovered is because nobody is brave enough to ask Chuck Norris to give up his favourite coffee mug.
Chuck Norris is a coward!
If that sucker was so brave as people say he would show up here right now and smash my head against my key
Ancient Egypt Puns
How did brave Ancient Egyptians write?
With hero-glyphics.
Want to start your day laughing? Register to our Daily Joke! Want to start your day laughing? Register to our Daily Joke!
Did you mean:
Continue With: Facebook Google
By continuing, you agree to our T&C and Privacy Policy
Contact us | Help | About us | Terms | Privacy policy | Categories | Collections