One Liners and Short Jokes
How many zen masters does it take to change a lightbulb?
Two, one to change it, and one not to change it.

Throwing Faith Off the Cliff 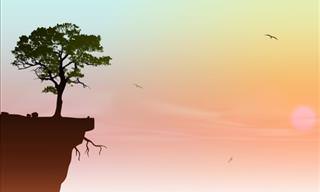 A priest, an Imam and an old Zen master meet in a park. The Imam says that his is the true faith. The Buddhist maintains Zen is key, while the Priest of course argues that Jesus is the way. This went on for hours until finally the priest says, "let's settle this once and for all. We all jump off a cliff, and whoever's God saves him will we know that theirs is the true faith. " After thinking about it, the other two agreed. They found a cliff and the Imam went first. As he jumped, he shouted "Aaaaaaalllllllaaaaaa...." SPLAT! Both were shocked but not surprised. They said their prayers for the Imam and continued. The Buddhist Zen master went next and, as he stepped off the roof, he chanted quietly "zen, zen, zen, zennnnnn..." while utterly calm, he imagines himself as light as a feather... and indeed, his fall starts to slow down until he lands lightly, unharmed. Giving a relaxed smile to the Priest, he gestured to the cliff for his turn. The priest was unperturbed. Taking a few minutes to compose himself, he then took his leap of faith: "Jeeeeeesssssuuuusssssssss.... zen zen zen zen zen zen zen zen..."
religion joke priest cliff jesus christianity islam imam zen zen master buddhism buddha
Rate: Dislike Like
Clever Jokes
A Zen Monk is talking to a hot dog vendor.
"What will you have?" asks the vendor.
The Monk says, "make me one with everything."
Puns
My Japanese dentist became a woman.
He’s a trans zen dentalist.
Want to start your day laughing? Register to our Daily Joke! Want to start your day laughing? Register to our Daily Joke!
Did you mean:
Continue With: Facebook Google
By continuing, you agree to our T&C and Privacy Policy
Contact us | Help | About us | Terms | Privacy policy | Categories | Archive | Collections
Login
Already registered?
Enter your email address and get full access.
Did you mean:
Not a member? Click Here
Personal Details