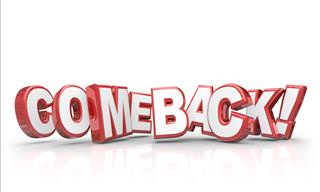 SMART ANSWER #6 It was mealtime during a flight on Alaska Airlines. "Would you like dinner?" the flight attendant asked John, seated in front. "What are my choices?" John asked.. "Yes or no," she replied. SMART ANSWER #5 A flight attendant was stationed at the departure gate to check tickets. As a man approached, she extended her hand for the ticket and he opened his trench coat and flashed her. Without missing a beat, she said, "Sir, I need to see your ticket not your stub." SMART ANSWER #4 A lady was picking through the frozen turkeys at the grocery store but she couldn't find one big enough for her family. She asked a stock boy, "Do these turkeys get any bigger?" The stock boy replied, "No ma'am, they're dead." SMART ANSWER #3 The cop got out of his car and the kid who was stopped for speeding rolled down his window. "I've been waiting for you all day," the cop said. The kid re plied, "Yeah, well I got here as fast as I could." When the cop finally stopped laughing, he sent the kid on his way without a ticket. SMART ANSWER #2 A truck driver was driving along on the freeway. A sign comes up that reads, " Low Bridge Ahead." Before he knows it, the bridge is right ahead of him and he gets stuck under the bridge. Cars are backed up for miles. Finally, a police car comes up. The cop gets out of his car and walks to the truck driver, puts his hands on his hips and says, "Got stuck, huh?" The truck driver says, "No, I was delivering this bridge and ran out of gas." SMART ANSWER OF THE YEAR 2020 A college teacher reminds her class of tomorrow's final exam. "Now class, I won't tolerate any excuses for you not being here tomorrow. I might consider a nuclear attack or a serious personal injury, illness, Or a death in your immediate family, but that's it, no other excuses whatsoever!" A smart-azz guy in the back of the room raised his hand and asked, "What would you say if tomorrow I said I was suffering from complete and utter sexual exhaustion?" The entire class is reduced to laughter and snickering. When silence is restored, the teacher smiles knowingly at the student, shakes her head and sweetly says, "Well, I guess you'd have to write the exam with your other hand."
family ticket comeback joke dead departure grocery store smart answer stock boy turkeys stub french coat
Rate: Dislike Like
Want to start your day laughing? Register to our Daily Joke! Want to start your day laughing? Register to our Daily Joke!
Did you mean:
Continue With: Facebook Google
By continuing, you agree to our T&C and Privacy Policy
Contact us | Help | About us | Terms | Privacy policy | Categories | Collections